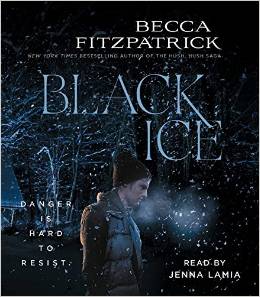 Many years ago I read Fitzpatrick’s engaging trilogy starting with Hush Hush and enjoyed it so much.  I was so excited to give this one a try and see if these new characters could live up to the wonderful books she had written previously.  They did.  ~Sheila

Britt Pheiffer has been training for her upcoming winter backpacking trip to the Tenton Range with her best friend Korbie where they will be staying at Korbie’s family cabin.  When Korbie’s college brother, and Britt’s ex boyfriend Calvin decided he is going to join them by meeting them at the cabin, Britt is not sure if she is excited or annoyed.

While the girls on their way to the cabin a blizzard makes the roads impossible to drive on and they seek shelter at a cabin they find in the woods.  They gratefully accept the hospitality of the two young men, Sean and Mason, occupying the cabin soaking up the warmth after a chilling walk.  Yet soon the girls realize all is not as it seems.  The two men are fugitives for murder, on the run from the law, and Britt and Korbie have just become their hostages.

The men decide that Britt who has more outdoor skills that Korbie will guide them off the mountain.  While Sean is dark and angry with a quick temper, Mason tries to keep him calm and protect Britt when he can.  Is Mason an ally?  Can a cold blooded killer be an ally?

Britt’s only hope is that Calvin discovers her abandoned car and comes looking for her and Korbie.  And hopefully he will make it before it is too late.

Becca Fitzpatrick does it again with characters that are three dimensional and a story line that keeps you guessing.

I enjoyed listening to Black Ice on audio, Jenna Lamia (narrator for The Secret Life Of Bees, The Help, Looking For Me, Saving Cee Cee Honeycutt) has just the youthful voice for this book, as well as the diversity to handle the male voices of the book as well without sounding like a girl trying to be a guy.  Impressive as always!

Black Ice was a wonderful listen and a good story line that is at once scary and also a little bit of a YA romance, a mix that works well here.  I enjoyed experiencing this author again.