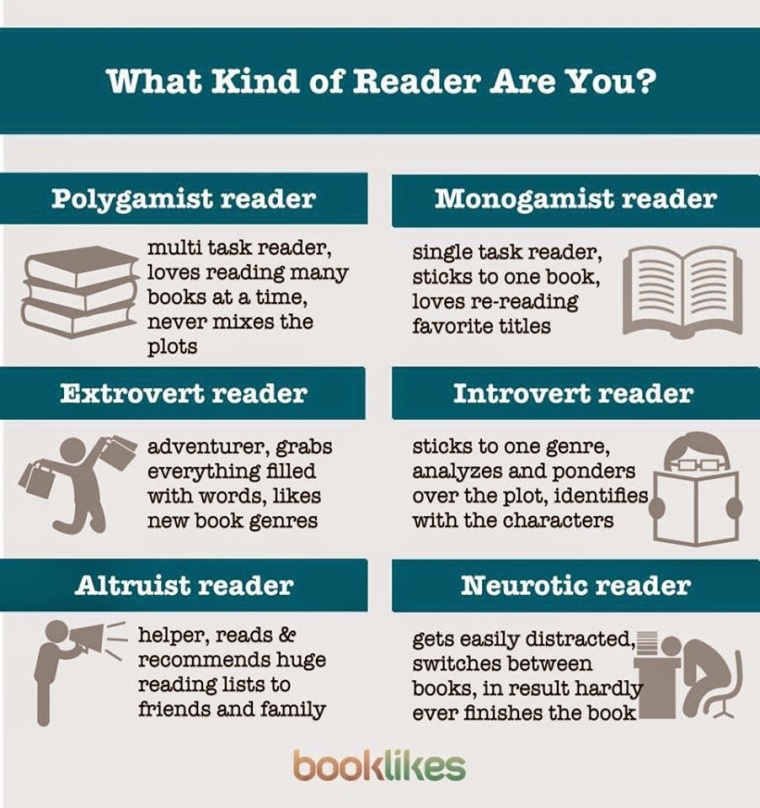 How cool is that?

Looking at this list I am pretty much everything listed on the left side.

Polygamist Reader:  I do usually have at least two books going at the same time and 2 to 3 audio books.  I pick up the book I am in the mood for, and often if one takes off, the other will be put aside until I finish the one.  Audio is for convenience and I have one in the car, one in the house and one on my phone.  I usually listen to a little of each of these every day.

Extrovert Reader:  I do like trying new genres, beautiful books call to me.

Altruist Reader:  Oh yeah.  If I like it, you know it.  I gush about it here, I tell my friends, groups I am involved in, and our library.  I have several friends who call me for book recommendations and I am happy to oblige.

So how about you?  Do one or more of these styles refer to the way you like to read?  Do you see any pro’s or con’s to your style? 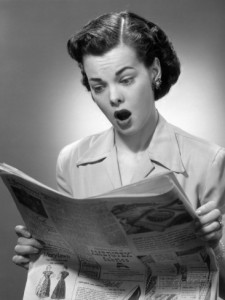 Recently while reading a review, the writer had mentioned a surprising twist towards the end of the read that changed their thoughts on the book.  I am certain that in my review of this same book, I too mentioned a twist towards the end that really threw me for a loop. It had been a discussion on Twitter that saying there is a “twist”, is sort of a spoiler to the reader of the review who has not yet read the book.

I am reminded of Season Two Downton Abby.  For those who may not know, this is a British tv show on PBS that has caught the attention of many… addicting for sure… and that is not a spoiler… I don’t think.  😉  Anyway, a friend of mine who had finished the second season before I had, eluded to a big SHOCK that would be devastating once I knew it.  I remember from that point on each episode I watched I was waiting for it…. wondering, is that the big shock?  Is that?  When will it happen?  Who will it involve?  It may be safe to say that knowing something big was coming did take a way a bit of the experience as I was waiting for the BIG THING.

I can see how saying there is a shock, or a twist can lead to the reader waiting for that moment to happen – but I think it also builds up the read.  When I mention that a book shocked me or a twist really impressed me as I had no clue, to me, that builds value in the read.  If a reviewer I enjoy says something like this, it draws me closer to the book… the mention of a surprise makes me want to know… “Wow, what happens?”

So the question before us is… is it?  Is it a spoiler to a book if we discuss that there is a twist at the end, or a change that happens that totally changed the way we felt about the book.

Also…  how do you define what a SPOILER is?  As Grace from Books Without Any Pictures recently (and brilliantly) said in a historical fiction review, “is it a spoiler if it actually happened?” 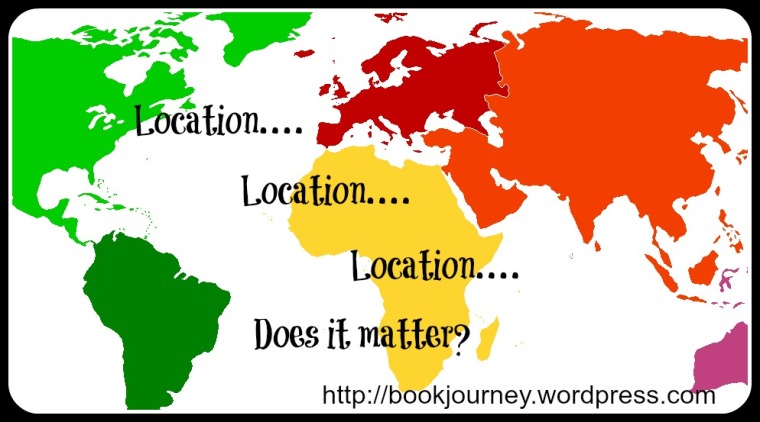 Fellow readers… we can talk right?  We have that “love for books thing” in common, and if I may be so bold… we do enjoy hunkering down to a really good read.  Now while traditions and props may differ almost like a set up for a game of Clue….

In the recliner, favorite blanket, bowl of popcorn

on the deck, in the sun, large glass of iced tea

at the library, in a sunny window, feet propped at a 30 degree angle

in the living room, on the couch, surrounded by cheese,crackers,grapes and a glass of wine…

we can probably all agree that not much compares to digging into that book that fully takes you inside the story line… blood, sweat and tears… you are ALL IN.

Which brings me to my point….

If a book is not clear about where it is locally centered, is that a bump in the read for you?  If you do not know if you are reading about a smoldering California summer or a wintry bout in Alaska… does the book miss something?

I ask because I fall into the I want to know category.  I like to know where I am reading, it is a part of my level of involvement with the book, placing me into a deeper sense of knowing where I am and what that might feel like.  In some books, location is such a large part of the book, it almost becomes a character in itself…

Even dystopian reads can give you a feel for where you are, even if the world is no longer as know it… take Hunger Games for instance.

And even though I do prefer knowing States or countries, I am even ok with an area being described as, “in the south” or “way up North”, at least that gives me something.  Although I do love the brave authors that put us right into a city and state 😉 )

For todays bookish topic of discussion I am curious if this love of knowing where I am at geographically is more of a “yeah that’s just you Sheila”, or is it a “I agree, I like to know where I am in a book”.

And since this is the topic at hand (or at keyboard)….

PS… if you are a World Book Night Giver, please in the comments let me know where in the world you are giving out books.

I have been watching My Friend Amy’s Faith in Fiction posts for several weeks now and just have not had the time to participate but told her last week that this would be the week that I would start.

By reading her post this morning and then searching my book shelves, I find that her response about the lack of Christian authors of other nationalities is few and far between to be true. In fact, I was surprised to look through my wide variety of books to come back with a Christian Author of another nationality for this post…. and I came up empty handed.  (Read Amy’s post she mentions a couple authors here who I have not read but sound like they have great reads that I would love to try.)

This sort of shocked me as I guess, when I am choosing a Christian Fiction read I have never paid attention to what nationality the author was, I just assumed that there were many represented in what I have read.  This is not true.

When we talk diversity in Christian Fiction I think back to three books I read several years ago by a Christian Author who I just loved and found to be so real, Randall Arthur.

The three books are Jordan’s Crossing, Brotherhood of Betrayal, and Wisdom Hunter. For me, at the time of reading, Randall had such a fresh perspective on Christian Fiction that I had not experienced before. These books each have a powerful message about the enslaving hypocrisy of legalistic Christianity.

Randall Arthurs books deal with tough topics like in Wisdom Hunter,
” Jason Faircloth is a pastor in a large and growing church. He is known as the general, and leads with power. Jason sees the world in black and white. That means some thing are absolutely wrong and other things are absolutely right. Jason believes God has shown him which ideas are which. He is so strict that he drives his teenage daughter to run away.
One day Jason’s world is turned upside down. He learns that his runaway daughter died after just delivering a baby. Jason’s daughter was married, and the father of the baby does not want Jason to see the baby; or know where they live. Jason’s wife goes into a deep depression after hearing the news, and dies shortly after.
Jason feels like he has no idea what to believe in anymore. He begins a nation wide search to find his granddaughter and discover what life is about. ”

When pastor John Rau, an avowed liberal, accepted a position with a European missions agency, his decision was not based on an opportunity to serve God, but on the monetary rewards the position would bring him. Shortly after his family’s arrival in Germany, Jordan’s priorities dramatically change. When his young son, Chase, is murdered, Jordan becomes obsessed with finding his son’s killers and delivering justice by his own hand.

“Your love for one another will prove to the world that you are my disciples,” Jesus said (John 13:35, NLT).  Respected missionary pastor Clay McCain leaves his family and growing church in Sweden for a beautiful, wealthy woman. But the Christian community reacts cruelly – even to his innocent abandoned family… A Family Nightmare… Clay McCain, a high-profile American pastor serving in Stockholm, Sweden, mysteriously disappears. Who can his wife, Rachel, and her three young children turn to for help? Her Swedish friends? Her home church in the United States? Her mission board? Her relatives? Rachel’s eventual outreach of trust, alongside a shocking discovery, sets off an unexpected avalanche of betrayal that turns her world, her family, and her faith upside down.

Randall Arthur served as a Missionary in Europe for twenty-two years.  He and his wife Sherri, worked as Church planters in Germany and Norway before returning to the US in 1998.

I love that he touched on many subjects that are not easy to  discuss in Christian fiction when the reality is, these are  import topics.

There are many great Christian Fiction authors and reads out there and I tend to like the ones that really press the tough issues that are a reality in our world.

Seriously….  It is an age old statement… a sort of urban legend if you will…  “You can not judge a book by its cover.”

Uhhhhh….. Who said that?  Certainly not the “they say” we hear so much about.  You know the ones.  “They say” it can’t be done.  “They say” that milk is bad for you and eating fish causes you to get webbed toes….  Ok, not to get side tracked here.

I admit when browsing my favorite book stores looking for that next hidden treasure, that diamond among the coal… I do notice the cover.  The cover, much like meeting a person for the first time, is the initial introduction.  While the cover is not the sale, it is what causes me to stop – look at the title and flip to the back to see what it is about.  The cover… is art.  It is what I hope to showcase in my own library… big beautiful books.

The cover makes me wonder what it holds inside… where will it take me?  Is it a scene of a far away land?  An eerie looking building?  It it footprints in the sand and you have to wonder who’s they are and where did they go?

I have on occasion even purchased a book at a sale because of the beauty of its cover.  (I know, I know… insert gasp here.)  Merely eye candy.

This is just me talking about book browsing.  If someone suggests a book to me or I read a good review about a book – the cover doesn’t mean a thing.  I go out and find a book based on that review, and think highly of the reviewer who found a book that didn’t necessarily shout “Pick me!”

The questions I present today is – do you (and be honest) ever judge a book by its cover?