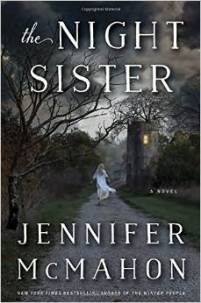 The Tower Motel was once a place where people stopped and stayed… a continuous flow of activity.  Now, many years later the hotel lays in despair and the girls who used to play there; Amy Piper, and Margo only have their memories.. and the memory of what happened that destroyed their friendship.

When a crime is committed that Amy is accused of, Piper and Margo are forced to relive what they had hoped they would never have to speak of.  The secret that had been held in the past – generation to generation… to come to light now.

Author Jennifer McMahon has amazed me before with her books such as Promise Not To Tell, Winter People, and The Island of Lost Girls. She has a way of adding an element of darkness to her stories.

Such is the case with Night Sister, once again Jennifer McMahon weaves a dark tale, but this time I just did not connect.  I just found the story too far fetched and the back and forth feel of the girls in modern time searching out the clues to the flash backs of what happened in the past… I don’t know.  It just didn’t work for me.  I finished the book hoping for some big revelation but it never really came.

Here are a few different opinions I found on line:

View From My Home   Highly recommended for fans of the author, coming of age stories in rural settings, mysterious suspense, and those willing to take a chance on a story with a plot ending you would never see coming when you started out.

Tales Of A Book AddictThe way this book unfolds is so impressive. It’s like Ms. McMahon just lightly peels away layer after layer until you’re finally at the heart and soul of the story.

The Caffeinated Book Reviewer I have been in the mood for suspenseful reads and The Night Sister with its creepy vibe and paranormal elements/lores was just the perfect fix.

I listened to this one on audio, the narration by Cassandra Campbell is almost always a draw for me and while I didn’t love her narration in this one (some of the females were too winy voiced) she is a narrator I admire and will continue to watch her work.

8 thoughts on “The Night Sister by Jennifer McMahon”