I had a busy week but do not think that apply’s to my reading and listening to audio.  I was buried in projects, building websites, working with both of my non profits… and well.. here is what I posted:

The Precious One by Marisa de los Santos

The Boy Who Loved Rain by Gerald Kelly

First Frost by Sarah Addison Allen (with a recipe!)

A Day InThe Life Of A Book Blogger (you may have seen this fun meme around the past few days) I was late, but I joined in!

That’s my week.  It may look like i did ok but in all honesty I have had the Writers Cook Book and The Precious One done for a while – I was just waiting for their release date.

This week will be another busy one.  Remember that little fun interview I get to do this week?  Well that will take me out of town Wednesday afternoon through Thursday evening. My reading I plan on is this: 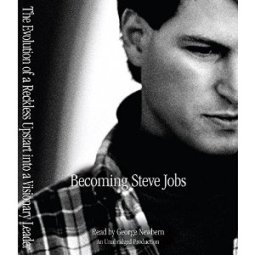 There have been many books – on a large and small scale – about Steve Jobs, one of the most famous CEOs in history. But this book is different from all the others.

Becoming Steve Jobs takes on and breaks down the existing myth and stereotypes about Steve Jobs. The conventional, one-dimensional view of Jobs is that he was half genius, half jerk from youth, an irascible and selfish leader who slighted friends and family alike. Becoming Steve Jobs answers the central question about the life and career of the Apple cofounder and CEO: How did a young man so reckless and arrogant that he was exiled from the company he founded become the most effective visionary business leader of our time, ultimately transforming the daily lives of billions of people?

Drawing on incredible and sometimes exclusive access, Schlender and Tetzeli tell a different story of a real human being who wrestled with his failings and learned to maximize his strengths over time. Their rich, compelling narrative is filled with stories never told before from the people who knew Jobs best and who decided to open up to the authors, including his family, former inner circle executives, and top people at Apple, Pixar, and Disney. In addition Brent knew Jobs personally for 25 years and drew upon his many interviews with him, on and off the record, in writing the book. He and Rick humanize the man and explain, rather than simply describe, his behavior. Along the way the book provides rich context about the technology revolution we all have lived through and the ways in which Jobs changed our world.

Schlender and Tetzeli make clear that Jobs’ astounding success at Apple was far more complicated than simply picking the right products: he became more patient, he learned to trust his inner circle, and he discovered the importance of growing the company incrementally rather than only shooting for dazzling, game-changing products.

Molly Bloom reveals how she built one of the most exclusive, high-stakes underground poker games in the world—an insider’s story of excess and danger, glamour and greed.

In the late 2000s, Molly Bloom, a twentysomething petite brunette from Loveland Colorado, ran the highest stakes, most exclusive poker game Hollywood had ever seen—she was its mistress, its lion tamer, its agent, and its oxygen. Everyone wanted in, few were invited to play.

Hundreds of millions of dollars were won and lost at her table. Molly’s game became the game for those in the know—celebrities, business moguls, and millionaires. Molly staged her games in palatial suites with beautiful views and exquisite amenities. She flew privately, dined at exclusive restaurants, hobnobbed with the heads of Hollywood studios, was courted by handsome leading men, and was privy to the world’s most delicious gossip, until it all came crashing down around her.

Molly’s Game is a behind the scenes look at Molly’s game, the life she created, the life she lost, and what she learned in the process.

I have other books I am listening to and reading that I mentioned last week.

What are you reading this week?  What did you read last week?  Add your Its Monday What Are You Reading here where it says click here:

34 thoughts on “It’s Monday! What Are You Reading?”