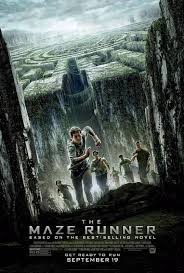 All Thomas knows is that he wakes up in a world he is unfamiliar with.  He is surrounded by other male teens and is welcomed to the Glade.

The Glade, as he learns is a walled in community that protects the group from the Maze.  The Maze is a world of walls and changing routes and creatures that come after anyone who dares to go into the Maze.  Thomas learns that a box appears every 30 days with a male teen in it, Thomas is the latest arrival.  A few, called runners, go into the Maze during the daylight hours (safer than nightfall), looking for a way out of wherever they are.

As Thomas becomes familiar with the surroundings and engages with the other boys, things in the Maze start to change.  Some blame Thomas, saying he is not like them … and Thomas has no idea what that means, he knows as much as they do about The Glade and that is not much.

Then… another person arrives in The Glade.  The box is early… it has not been 30 days and this time it is not a male teen…

And with her is a note, “This is the last one”.

I read The Maze Runner a couple of years ago after I met James Dashner in New York and found him to be delightfully funny.  I enjoyed the book very much, yet for some reason I never continued on with the series.  Now, after watching this movie, I will be pursuing the rest of the books… I am hungry to know more.

The Maze Runner movie is done very well.  I was actually surprised how much I enjoyed it.  Definitely recommend the book, the movie… and the author.  😉