This past week, 13 of the 16 Bookies gathered together for fun food, conversation, and a close up look at October Classic read, In Cold Blood by Truman Capote.  My full review of the book is here. As I had mentioned in an earlier post, I was curious about how a true crime would go over in this group.  We had read an Anne Rule true crime many years ago when we were about 8 or 10 members at that time, but nothing since then.

Our discussion mainly centered around the time and the crime.  We agreed that in the small community where the crime took place, you did not worry about your neighbors or what you said in public about what you owned.  The results of In Cold Blood, changed this community, and many communities forever.  I mentioned to the group that I had recently been speaking to a woman at a dinner I attended about our book club choice.  She said at the time of the crime she was a young girl and her parents told her, “you never tell people about what we have in our house… you do not mention the safe, or anything.”  The crimes of In Cold Blood, put fear in so many.

We also discussed how things randomly happen.  If Richard Hickock and Perry Edward Smith had never met, never spoke with the gut who had worked on the Clutter home…. the crime, by circumstance would never have happened.  We compared this, on a much lighter note to how we all wound up in book club together.  Looking around the room, when book club started I knew only one of the thirteen girls in the room.  We all met by circumstance, someone talked about book club and we agreed to go.  If not for Bookies and our group talking about it… we would not all have been in that room together this week talking about this book.

Overall, the book was rated mainly average which is actually a good rating for a classic.   A few rated it higher, and a couple rated it lower.  The overall thought was that most of us do not like to read true crime, but this one worked as it is written in such a fictional way.  This was mainly because of the dialogue in the book compared to just straight facts about the crime.

Our food for the night… we themed a lot of foods from the times – Angie even made from a 1959 cook book a Purple Sea Urchin dish – little hot dogs poking out of a cabbage with Sterno in the middle to cook them!  I made the cucumber sandwiches… I went with the theme of funeral food. 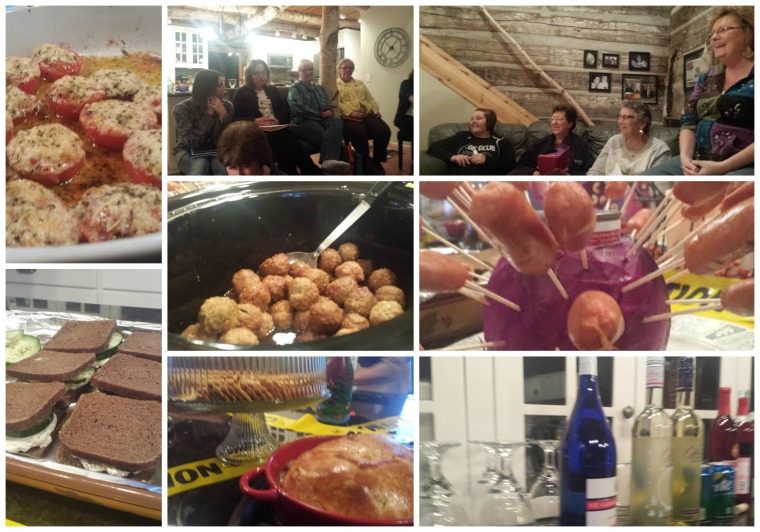 What makes this a good book club choice?

I think it is good for a book club to shake up genres.  A true crime can bring out a different type of discussion, and while it is true crime, In Cold Blood is written in such a way it is not overly horrific, therefore making it a good book club pick – and it is a classic!  In Cold Blood is one of the books i like to be able to say I have read due to its classic status and the fact that Truman Capote is an author you will want to read.

When planning food for a book such as this I loved the idea Angie had of making food from the era.  She also brought (not pictured) old style potato chips and homemade dip with the Liptons onion soup mix, which apparently became popular in 1959.

While decorating for a true crime, or dressing up is hard to do – we did use a little crime scene tape that I had left over from the banned book window at the library.

For the groups that like to go a step further – In Cold Blood is a movie, as well as Capote (newer).  Either of these movies could add to your discussion on book and or author.