Yes, yes… I know it is July.  If you read my morning post you will know that I inadvertently missed posting one of our awesome narrators responses for the June Audio Book Month features.  Robert Fass was also one of the narrators that was at the Narrator Luncheon in New York in May.  I had the pleasure of meeting him, but did not have enough time to really chat much with him.  Now, Robert has graced Book Journey with his thoughts on Narrating – a question that seemed to pop up frequently throughout the comments last month.  How does one become a narrator?  Please welcome, Robert Fass. 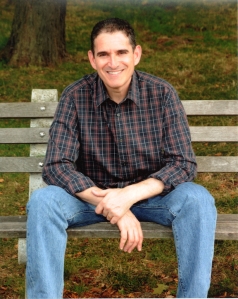 I’m Robert Fass, and I started narrating professionally in 2005, though it took a number of years before I started making a living at it.

I have completed around 80 titles at this point, across just about every genre, including:
I am one of only two narrators approved by the authors’ estate to narrate the Ellery Queen mysteries (I’ve narrated 10 so far), plus works by John Steinbeck, Isaac Asimov, Ray Bradbury, Joyce Carol Oates, Carlos Fuentes, Jeffery Deaver and more.  Along the way, I’ve had 7 Audie nominations and won twice.

I have been a professional actor for over 30 years – a longtime member of the performers’ unions, trained in the classics, studied for many years with the great Uta Hagen – and I have always loved the spoken word. My mother was a librarian and my dad was a volunteer narrator for the blind for over 25 years. When my dad passed away in 1997, I began volunteering in his honor at a local radio reading service for the visually impaired here in NYC. I lucked out the first week I showed up: one of the readers for THE NEW YORKER magazine was out and I was asked to step in. It became permanent and I spent nearly every Wednesday for the next 11 years reading the best fiction, journalism, criticism, and poetry around to a national audience. It was the best training ground anyone could wish for.

My mother was a librarian and my dad was a volunteer narrator for the blind for over 25 years.

Around 2005, a fellow volunteer offered me her invitation to a seminar given by the Audio Publishers Association (APA). They were at that time seeking to bring more theatrically trained performers into the narrator community. I went and was given the opportunity to record a sample and send it to the senior producer at Brilliance Audio, which is a large producer in the mid west (now owned by Amazon). His response was that while I didn’t have the richest voice in the world, he thought I was a very good reader and might expect to find a small amount of work in this field. That was enough encouragement for me to create a professional demo CD – and I sent it to every single producer and publisher in the APA member directory.  A handful of producers were impressed enough with it that they wanted to give me an opportunity to narrate for them. I was lucky to get to narrate works by some major authors right out of the gate, my first couple of titles got reviews (positive ones) and I started to make fans within the producing community. That put me firmly on the path and I chose to pursue it from there.

So… You Want To Become A narrator…

1. Know that narrating audiobooks is a craft. If you’re serious about it and you aren’t a trained actor, start taking classes in acting and vocal production.
2. Don’t think you can be a narrator simply because people tell you that you have a nice voice.
3. Get good before you cut a demo.
4. Join SAG-AFTRA so that if you are fortunate enough to find work in this field, you can begin receiving pension and health benefits.
5. Be prepared to spend long periods of time alone working your ass off in a little box. And loving it.
6. Unless you are in one of the major markets, you will very likely need to invest in a home studio which – even if you do it on the cheap – ain’t cheap.
7. Be aware that any narrator starting out today also has to be an engineer and a director, because it’s just you in the booth doing everything.
8. Know that you rarely have a choice in the material you are offered.
9. Be patient and tenacious.
10. There are many versions of this next basic piece of advice, but if you think you would like to be an audiobook narrator, the first thing you should do is to take a book off the shelf at random, open it to a random page, take it into the closet and read the entire page aloud. Then go back to the top of the page and read it again. Then do it two or three more times. If that’s your idea of a good time, you might think about taking a first step into narration. There is a more comprehensive version of this point in a video by narrator/instructor Sean Allen Pratt.

An illustration of the need to be patient when starting out: when I sent my original demo around, a very senior, highly respected producer responded with tremendous enthusiasm. “You’re on my A-list! You can obviously do everything! I can’t wait to work with you!” She was quite sincere about it. But at least a year went by before a project came along that she felt was a good fit for me to audition. It was going to be a big deal, a new series that was hoping to be the next Harry Potter. We worked in the studio for a long time together, but in the end I didn’t get it. And I didn’t hear from her again for months. But one day, I got a call from her out of the blue. Unbeknownst to me, she had been circulating an excerpt from that audition as a voice sample for consideration in various projects, and it turned out that Ray Bradbury had selected me to narrate what turned out to be the last book published in his lifetime, FAREWELL, SUMMER (which was the sequel, 50 years in the making, to his beloved classic DANDELION WINE). That was the second book I ever narrated.

This is the final audio book month post.  For every post you comment on in June (and this one on July 1st) that has this audio book symbol:

I will put you into a drawing for a $25 book certificate for each comment (Barnes and Noble or Amazon – your choice).  Winner will be drawn this week!