Ruth Reichl was happy with her job at the Los Angeles Times as Food Critic.  Yet when an opening came at the New York Times for a food critic the buzz was that it was going to be her they would pursue…  while Ruth was thinking, “No… I don’t want to move to New York”, her husband, television producer Michael Singer was putting in for a transfer figuring the move was inevitable.

Michael, as it turns out was right.

After an interview with The New York Times that Ruth did not try very hard at, she started to allow herself to say dream a bit of what it would be like to take the position id offered…. then she became a little unsettled when they did not call…. had she blown it?  When the call did finally come Ruth said “Yes” and she, her husband and young son made the move to New York.

What Ruth did not realize was that the restaurants were waiting for her.  Her picture hung in ever highly notable kitchen so the staff would know when she came to their resistant and they could be sure to give her the best service so they would get the best reviews.

What they didn’t know was that Ruth was not about to let it play out that way.  She wondered how she could give people honest reviews of the restaurants if they were catering to her because of who she was.  The answer, as it turned out, came in the form of a petite friend of her mothers who was a make up artist… Ruth would go these restaurants in disguise.

Garlic and Sapphires is the true memoir of a critic in disguise who took on the personalities of who she dressed as and learned all too quickly which restaurants only cared about who were you were and what you could do for them.  Her reviews were cut throat and made a lot of people angry, but they were honest… and the average person who made a reservation (or not…) would know exactly what to expect.

I read Garlic and Sapphires once before a few years back.  At the time of this typing, I believe I reviewed it here at Book Journey but I am not sure and I refuse to look until I have finished writing this review so one opinion does not affect the other.  Does that make sense?  When my book club chose it last month to be our April read with the idea that is we read it we would all dress in disguise for the review I was in… all in.  I love it when we go the extra mile.  😀

SO this second reading of Garlic and Sapphires went something like this… I really enjoyed it.  I loved Ruth’s disguises and how each one transformed her.  She became the character and no one was the wiser.  She could walk by people she knew and they would not even do a double take.  No one knew who she was and with that she could walk into any restaurant and see how the “unfamous”, unadorned, were treated.  But that wasn’t all… Ruth would dress older, she would dress poorer,  and on some occasions she would dress as more confident and sexier….  and of course, she would also show up as herself – actually visiting a restaurant many times before writing her review.

I enjoyed the story behind the review, and then reading her review.  I loved the description of the foods she ate as my mouth watered in anticipation… could I taste it simply through her words?

I enjoy reading foodie books.  I don’t know why I am so fascinated by them, by the life of a critic amazes me – at first thought I think, what a great job… tasting the best foods, in the best restaurants, but when I really think about being a critic must really be hard work.  You feel with the pressures of getting it right and the backlash of those who disagree….

If you are a foodie reader as well, I think you will really enjoy this fun twist on food critiquing.

When this book came up in the vote last month, Kaydi who nominated it added in that it would be fun to dress up as Ruth does in the book.  YAY!!!  I love bonus book club events!  😀 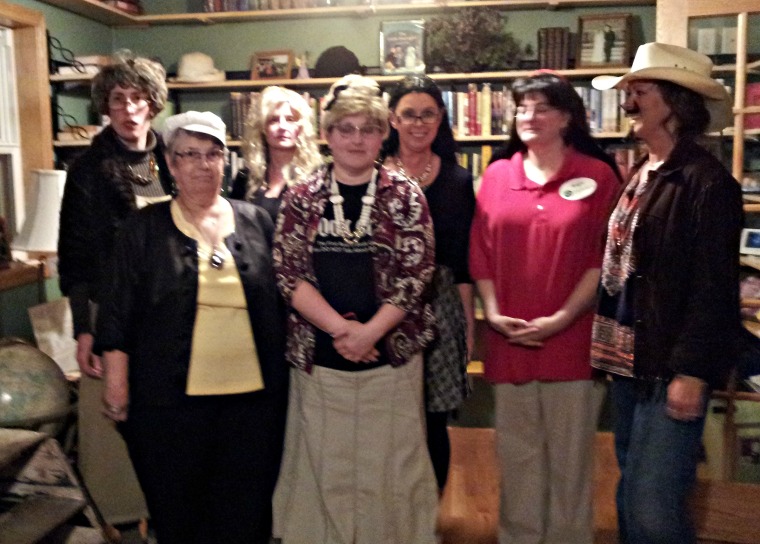 7 of us the 12 of us who were there the review did dress up.  Brenda (back row – hot blond) said her husband told her as she left her house, “I think you really enjoy these dress up events…”

I think personally what I love about the dressing p is you really get see some fun personalities come out and I have to smile thinking these are memories in the making. 🙂

The Bookies over all rated the book an average read, while everyone seemed to enjoy it, a few brought up that it seemed to get tedious after a while.  We had a fun discussion of who we thought was Ruth’s best dress up and we mostly agreed that Brenda was her best as it really seemed to bring out the best in Ruth – and in others.  A line from the book was…

Is it possible to be jealous of yourself?

Of course we had food…. we were food critics after all….

Delicious food… fun conversation and then, Angie pulled out a chocolate tasting board… asn we all were able to try our own hand at being critiques:

I think this was a fun book to review as a book club and would recommend it for other book clubs as well.

17 thoughts on “Garlic and Sapphires by Ruth Reichl”