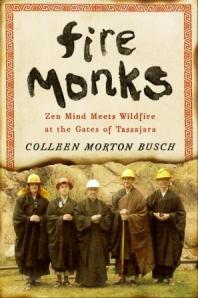 On June 21, 2008 lighting struck a very drought-dry California and ignited over two thousand wild fires in what became the lightening siege.  One of the blazes turned towards Tassajara Zen Mountain Center.  The monks within this area prepared for the fire to arrive, though told to leave the area, a small group of five would not consider leaving.

If you lived on the west coast, you knew of the fires.  If you lived in California, you smelled the smoke.   What was happening was news worthy, and the news was focused on Tassajara.

The center was famous for its hot springs, food, and peaceful environment.  What would happen to this place?  Could it be saved by a few?  And what if those few were merely monks, who practiced sitting cross-legged and staring at a wall – what were they really trained to do?

I am not a history buff.  Almost embarrassingly so.  I do not follow the news, and due to this, there are things in this world I think I should know about… but sadly – do not.

Unless of course, I find my way to a book, as I did in this case… a book about the fires of summer 2008.  From Minnesota, I am sure I heard about the fires, but did not follow the story.  I did not smell the smoke.  After reading this book I can no longer say that I have not heard the story.  I am not even sure if I can say that during this read, I did not smell the smoke.  As one can read about blueberry pie and their mouth begins to water vividly knowing the flavor, the same can be said for reading about a fire.

I went into this read knowing nothing of the Tassajara Zen Mountain Center.  I learned it was not only know for the practice of meditation, but also for bread baking and vegetarian dishes (see?  another word association to the taste buds – bread baking!  Mmmmm!)  I also learned that there is one road into Tassajara, a 14 mile unpaved one.

The book itself moves at a zen like pace.  You spend the first 150+ pages learning the background of Tassajara, when it

was purchased in the 1960’s, what it was, what it became and how.  You also are following the people and the decisions made prior to the fire.  All fascinating really, but a book about a massive fire… I wanted to see smoke.

And then we get there, where is evacuation… and fire… and it is exciting.  I read these pages quickly wanting to know after all this build up how it was all going to go. And as I write this I think – this is where the book really comes alive.  People fighting for what they believe in – against all odds…  Now that I know the story, I will not forget it.  I would recommend this book to others who enjoy amazing non fiction.

Reading this book reminded me of the devastating fire on the Gunflint Trail in Grand Marias Minnesota.  The Gunflint Trail is a fascinating road that goes up up up and is famous with history and books written about it.   It is known for moose sighting, bear, and other wild life.  We have friends from Brainerd who run a camp on the Gunflint every summer.  In May of 2007 the fire that they believe started from a campsite quickly found its way to an area of downed trees from an earlier storm and took off and our of control.  It consumed 40 buildings including a large camping resort, causing evacuation of many of the homes and businesses along the trail as the fire made its may closer.  Our friends camp was not harmed, the fire finally under control just a mere 13 miles away from it.

In early June I went to visit our friends and we drove the Gunflint looking at the damage.  It was heart breaking to see the normally lush and full forests gone – replaced only with black soot.  The only soothing to my soul were the green buds peeking out here and there reminding me that nature will conquer and replace in time.

I read this book as part of a TLC book tour