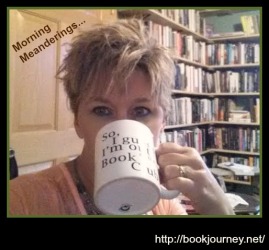 Good morning (or afternoon or evening depending on where you live).

Over the weekend I got it in my head that I was going to go through all my old posts and make an alphabetized page of all my book reviews for easy reference.  For the record… it was a bigger project than I had anticipated.  I worked on it in afternoons while listening to audio, and in the evening while watching movies, and off and on throughout the days…. and it took me three days to complete it.  It is however… done.

While it was a LOT OF WORK (I have been reviewing since early 2009), it was also quite the walk through Book Journey history.  As I made my way into the older reviews I actually discovered a lot.

I had forgotten many of the older titles that I had once reviewed and was surprised by some of the earlier titles that I had accepted.  There were a lot of so-so books in the early years, but there were also great reads such as this one and this one . And this one.  Ok there were a lot. I also discovered that I have reviewed Harry Potter and The Sorcerer’s Stone between book and audio… 4 times.  Yes! 4 times! I interviewed many authors in the early days and almost every review had a giveaway.  I also read a lot more James Patterson and Kristin Hannah than I had thought.

Many of the books that I reviewed in the early days were my own, from the library, and often for book club. I used a lot of color in my writing then… blue, red, green… and I bolded my entire posts.  My first book sent to me from an author was Dragon House by John Shors.  It was an excellent read. My first book tour was a book called A Will To Love by Kim Smith and I used a little picture to represent the tour:

Some of the non book review posts I ran into were the very first Morning Meandering was in August of 2009.  I also discovered that in 2009 I was signed up to participate on another Harry Potter Readalong!   I had also created a meme called Word Verification Balderdash (Ryan from Wordsmithonia will remember this one, he was great at it!)  We would create meanings for the fun word verifications we had found while commenting on blogs.  Some of them were hilarious!  My favorite non bookish post was one where I interviewed myself as the Wicked … err sorely misunderstood witch of Snow White (I have no idea why I did this and had actually forgot about it), the post is actually a bit funny…

So over all the project was a success.  It was more work than I had anticipated but it was fun to go back through every post I have written.  I laughed and I eye rolled.  It was all good. 🙂

Before I go today I wanted to share another Library Challenge.  I had started a Library Challenge here for 2015 and forgot that Felicia from Geeky Bloggers Book Blog hosts one as well.  I would encourage those of you interested in the library challenge to take a look at hers too… in many ways they are the same (so its really no more work), but she has a cool link to join in a Goodreads group which is pretty cool.  Also… check out her challenge pic…. SO COOL.  I am joining in and will do this one along with my own challenge.  On hers I think I will go for Thrifty Reader which is a goal of 24.

26 thoughts on “Morning Meanderings… Archived! (and a bit about Libraries ;) )”