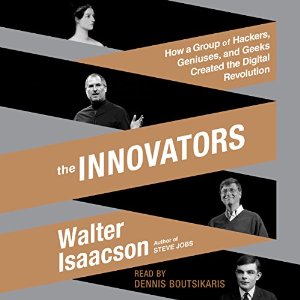 There are certain names in our lives and in our history that stand out as innovators…. those who had the ideas and the knowledge to move us forward in the computer and internet world.  Names such as Vannevar Bush, Alan Turing, John von Neumann, J.C.R. Licklider, Doug Engelbart, Robert Noyce, Bill Gates, Steve Wozniak, Steve Jobs, Tim Berners-Lee, and Larry Page, may ring a bell and that is just to name a few.

From computers first being thought of, to making them affordable and available to everyone.  To the invention of blogger, twitter, and more, Innovators shares with you the ups and downs on the wired (and wireless) world we live in.

I have always been fascinated with those who can come up with an idea, run with it, and make it work.  I think I have watched the Facebook movie about 10 times, read about Steve Jobs, and listened to audios about the inventions of gaming sites and Twitter.  Innovators, was the obvious next choice.

‘Visions without execution are hallucinations.’

I of course loved some information more, such as the whole creation of blogs was interesting.  I love that they said they were so surprised how it took off and how everyone had something to say about something!  Isn’t that the truth!

It is also interesting to hear about the behind the scenes of the powerful people… the fights… the terminations…. the brains…. none of it came easy.

Walter Isaacson writes a well informed book.  I enjoyed this on audio, narrated by Dennis Boutsikaris, it was well read.

7 thoughts on “The Innovators by Walter Isaacson”