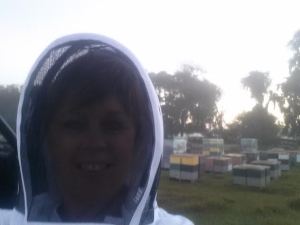 Good morning!  This post was planned for two Saturdays ago but where we were staying in Florida I had terrible internet and I could not get my pictures to load up.  Now that I am home they loaded up quickly and for this Saturday Snapshot I thought I would share what I did in Florida.

I was working with my friend Amanda and her husband Tim.  They own a bee business here in Brainerd, Buck’s Busy Bee’s.  The bees go to Florida every winter as the Minnesota winter months are too hard on them.  Amanda needs to go to check on them once a month and asked if I would like to come along and help and I said yes, it sounded like a nice break from the cold and I am fascinated by what the bees do.

November turned out to be a longer trip than initially planned.  We initially were going to be a week, but weather in Minnesota prevented us from completing some things here that had been planned out so we had to do that in Florida instead.  Our trip was 16 days of working sun up to sun down – and many days later than that.

One of our main focuses was to split the hives.  Splitting the hives makes more hives and when you have a strong healthy hive it is easy to take a few splits off it.  To split a hive each new hive must have: 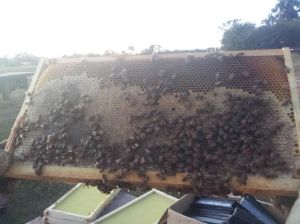 2.  Honey.  The frame of honey goes up against the frame of brood so the worker bees can feed the babies.   Preferably you would like two frames of honey one on each side of the brood. 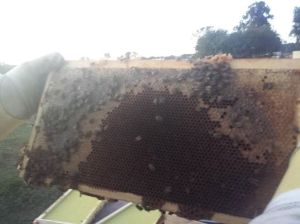 3.  Drawn out frames.  (You can see what a clean frame looks like at the bottom of each pic.  They are yellow and that is what the bee works off of).  A drawn out frame, as seen above can be dark like this one or could be light like the start of a honey frame.

4.  BEES.  You want lots and lots of bees to go with each hive to start their own.  The hives are actually moved  at night as that is when all bees are back in the hives and the forager bees are home.  These are the bees that go out and bring the pollen back to the hive.

5.  A QUEEN.  Each hive needs its own Queen.  I wanted to take a picture of a queen on a frame but to do that would have involved me to take my big work gloves off and well… it was a bit risky so instead I have this little video to show you the difference between the Queen and the other bees and how to find the Queen (yes I know I don’t have to capitalize “queen” but it seems like I should…LOL, she is royalty after all!)

What takes the longest in this process is that you must find the Queen before you start creating splits as she needs to remain in the bottom box as an existing hive.  The other splits will require a new Queen to be placed in each of their boxes/hives.

So how do you keep the Queen in the bottom box once she is found and you are not ready to move the rest of the hive yet?

A Queen Excluder allows the regular worker bees to crawl through the tiny slats, but the Queen herself is too large to fit through.  That way, once find the Queen and ensure she is in the bottom box, you put the excluder over the top of that box and then add the rest of the boxes of that hive on top of that.

I enjoyed finding the Queen although it can be frustrating when you go through each frame three or four times and can not find her.  Sometimes I felt that I was “Queen blind”.  Finding her though brought out the gamer in me, like I had passed that level.  She is actually fun to look at and watch.  She moves a little slower than the worker bee, but amazingly she is the bee that keeps the whole hive working.  Without her the hive will die.

Another thing we did in Florida was we went through and put in each box a small tray of this Beetle Trap Oil which I liked to call Beetle Juice.  The Beetle Oil (juice!) attracts beetles that can get in the hive and kill the bees.  The beetles which are tiny and black fall into the oil and are killed.  Nasty business.

We moved bees at night – over night actually.  They were loaded on to a semi truck after dark as that is when the bees are in the hive.  I did not do, but Amanda and Tim would then haul the new hives 3 1/2 hours away to host home yards, which are people who had agreed to have bees on their property.

It was a lot of work.  We usually started our day between 5:30 and 6:00 am and ended around 6 – 8 pm.  I pretty much just worked, ate dinner, and slept.  My hands hurt from all the lifting of the hives and frames each day as well as the stings on my fingers (even through the work gloves).  My hands are still swollen and I can not get my rings on yet.

That’s pretty much the basics of where I have been and what I have been doing.  I am in still recovering now that I am home (arrived Thursday evening).  Today I am just hanging around the house doing a little reading, a little audio, just chilling out.  My body is exhausted. 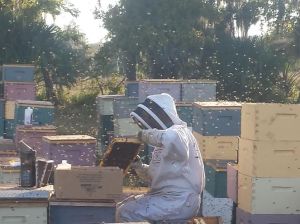