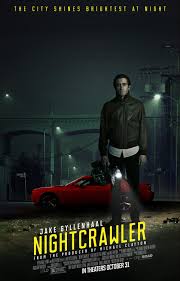 My synopsis:  Lou Bloom (Jake Gyllenhall) is desperate for a job.  In a “rainman” style he becomes a bit overly obsessed with whatever he is pursuing.  ON his way home one evening he witnesses a car accident.  When he pulls over he is fascinated by the van that pulls up and takes footage of the accident.  When Lou inquires about what they do with the footage, the driver says that they sell it to the highest bidder.

Lou starts researching how to take great pictures, and as he has no conscience, he has no problem going a step further that the average crime photographers, stepping in a little closer and getting the shots that bring in the money. He starts a working relationship with a news station manager, Nina Romina (Rene Russo).  When she tells Lou that they pay for the shots described as “girl running down street screaming with throat cut”, Lou does his best to bring in the darkest video.


My thoughts:  Smoking good creepy movie!   Most frightening and fascinating is the fact that most of what these paparazzi type camera persons do is legal as long as they do not get in the way of the police and rescue crews.  Of course in the movie, Lou does go too far… WAY too far.  His obsession that leads to the perfect shots, as well as his obsessive interest in Rene Russo’s character, drives him to do the unthinkable…

High action, major car crash scenes, a few gory close-ups…. adventure movie enthusiasts should find this movie both disturbing and good – and like a car crash…. hard to look away.  I personally would probably not pursue seeing it again, however I would rent it for my husband as he has not seen it yet and I think he would enjoy it as I did.