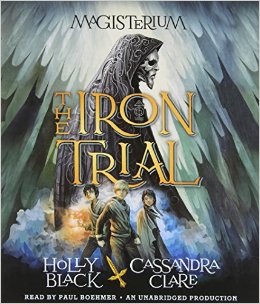 The hot combination of Holly Black (Spiderwick Chronicles and Coldest Girl In Cold Town) and Cassandra Clare *Mortal Instrument Series) …  Magic is about to happen!  ~Sheila

Most kids would do anything to be a part of the Iron Trials.

But not Callum Hunt.  His father has warned him that magic is dangerous and the Professors at the Magisterium are not to be trusted.  When Callum does his best to fail the tests to be chosen for the Trials he is chosen anyway from the many who tried to get in.  Now Callum, with two other students to be taught the ways of the Iron Trial.

But what tests await these first year students… what triumphs and what tragedy’s will they face?  While Callum tries to figure everything out, he starts to uncover deep truths about the Magisterium as well as himself.

As I started listening to The Iron Trials I sensed, as you may imagine by the synopsis above, that it carries essence of Harry Potter.  As any book that tackles the magical platform of Potter, I am thrilled to think that some day that book may be created… one that as of yet, has not.

You will see the similarities in the two friends that Collum has in school, but the similarity ends there.  This is no Ron and Hermione.  Yes they are in a magical school.  Yes while Harry has a scar, Collum has a bad leg.

I like the concept of the Iron Trials as (like the Potter books) each book will be a grade.  The current year for beginning student is Iron Trial, followed by:

The Enemy Of Death

While I enjoyed this Middle Grade story line, I am not sure that it grabbed enough to continue with the series. (Note that I said this same thing when Clare’s Mortal Instrument series came out and I read the first one thought I called it quits… and a year later devoured the whole series one after another).

Fans of such books as Harry Potter, Percy Jackson, and other series aimed towards kids with magical powers should find this series worth taking a closer look at.  With two rock star authors leading the way of this series, I would not be surprised if a movie does follow.