Originally published in September of 1954, a dystopian type novel where a group of British boys are stuck on an inhabited island who try to given themselves while waiting for rescue with disastrous results.  Lord Of The Flies has been called an early Hunger Games.

When a plane full of English school boys crashes onto a deserted island with no adult survivors, the boys ages 6 – 12 have to figure out a way to survive.

When Ralph, one of the older boys is voted to be their leader, and the runner up to his leadership Jack, a boy who will put in charge of the other boys and call them “hunters”, it looks like they are off to a good start.  They are each assigned duties like building a fire (so a passing boat might see the smoke), gather food, make shelter, and eventually hunt the wild pigs they find on the island.

Of course, boys will be boys, and the system quickly deteriorates as most of the survivors would rather swim and lay in the sun.  When Jack takes a team of boys hunting instead of maintaining the fire as he was supposed to things start to change for the worse.  Soon Ralph is being challenged by his authority and Jack feels that perhaps since he can provide food that he is the better choice for a leader.  The boys split into two different areas of the island.

While Ralph maintains Piggy, a heavier but also brilliant boy who with the help of his glasses can make fire, Ralphs team are not hunters.  While Jack leads a team that is fed well by the hunt, they are unable to make fire.  Unable to work together the two groups of boys turn savagely against each other; crazed from the heat and lack of basic survival needs with no adult supervision, the boys go too far…

and there is no turning back. 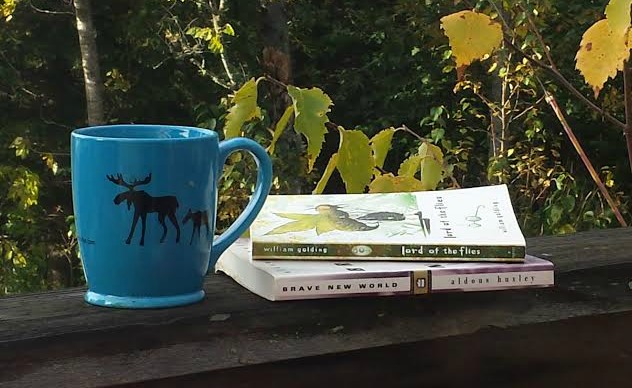 In my quest to read all banned books during banned books week, this is a small (202 pages) book that has been on my classic shelf for a couple of years, waiting its turn to be chosen.  As I left for the cabin on Thursday afternoon, I grabbed this one off the shelf.

At first Lord Of The Flies took a few pages to sink into the rhythm.  The book starts out after the crash.  (Think LOST).  You do not receive a lot of back story here as to where they were going, but you do pick up that they are a choir.

As the book starts to movie forward you have Ralph who is mainly given leadership because he has the conch shell which calls the wandering group together.  Piggy, who is constantly and sadly made fun of throughout the book, is a young voice of wisdom. Jack, comes along as a stronger boy one who wants recognition and quickly finds he is skilled at hunting which impresses the other boys.

According to author William Golding, Lord Of The Flies was written to trace the defects of society back to human nature.  (There is a wonderful back story to the book in the final pages)

I read the book in the space of a couple of mornings at the cabin.  The book easily held my attention as the frustrations quickly rise when Ralph discovers that it is a lot of work to try to get things done hen only a few are doing the work.  When the boys turn against each other and start acting live savages (one group turning to wearing face paint made from berries and mud on the island, all society acceptances seems to flow away.

Towards the end of the book my eyes were flying across the pages wondering what was going to happen.

I am so glad I had an opportunity to read this book called by Time Magazine in 2005 “One of the top 100 books of all time” and having won many awards.

SO why was this book banned?

Have you read this book?  What are your thoughts on the comparisons to Hunger Games?

If you have not read it, would you consider reading it?  Why or why not?