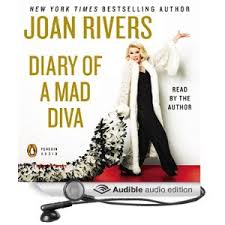 In diary format, Joan Rivers shares a year of her life…  the moments at home, the running to her shows, her conversations with fellow stars, Melissa….

but this is not a recap of Joan’s life and how she made her rise to where she was at the time of the recording – no, this is an account of her current life at the time of the writing… what she deals with as an aging star, and of course much harsh words for those who cross her path, both living and dead.

She complains about charitable cases, people with too many kids, those who starve themselves, those who are too heavy, the blind, the rich, the poor… you name it – if you know Joan, she will attack it.

I chose to listen to this audio because honestly, I know little of Joan Rivers.  With her recent passing, and seeing her books on audible, I thought I should give her a try.  Let me just say that Joan’s book is not for the faint at heart, easily offended, sensitivity to offensive language and lewd acts….

I will just say that while at moments she was funny, for the most part she was crude, and cruel and while I wanted to give this one a try, I will not become a fan of her work.  The audio reminded me a lot of Betty White and how she has become this crude older woman who people love because the “F” word coming out of her mouth is as hilarious as it is when a two-year old pops out an inappropriate word.  IMO, Betty sold herself out for this kind of publicity, I do not know when Joan became so crude or if she always has been that way, but this would explain why I never followed her career.

Personal note – when she said that Libraries were over and that we do not need them anymore… saying no one was breaking ground on new libraries… well….  now she just got personal.   ~Sheila

Note:  I have come to understand (really knowing little about this woman) that she was a ground breaker for women entering into comedy and being given a voice.  Joan Rivers served us well in our history of women stepping into new roles and for that I am grateful.

9 thoughts on “Diary Of A Mad Diva by Joan Rivers”