It has been a pretty AWESOME week and weekend here… lots of bookish happenings between Friends Of The Library Meeting, Book Club, and a great weekend at the cabin with a pretty much ” all books all day” day.  😀  That never happens.

Here is what I posted this past week:

Read It Before You See It – New Library Window 😀

The Divorce Papers by Susan Rieger

Not a whole lot posted but this week should be different… I finished two books and two audio while I was away this weekend (that 3 and a half hours each way makes for great audio time!) The books are both May releases so I may hold off on reviewing them for a bit but the audio is coming your way soon – and hopefully more to come as spring inches me away from my nasty tv habit at night and back into books on the deck 🙂

Here is what is on deck (oh I hope so!) for this week: 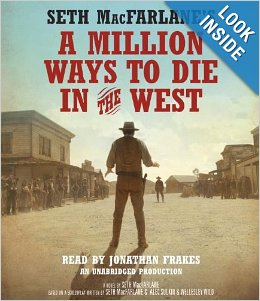 Mild-mannered sheep farmer Albert Stark is fed up with the harsh life of the American frontier, where it seems everything and anything can kill you: Duels at high noon. Barroom brawls. Poisonous snakes. Cholera-infected drinking water. Tumbleweed abrasion. Something called “toe-foot.” Even a trip to the outhouse. Yes, there are a million ways to die in the wild, wild West, and Albert plans to avoid them all. Some people think that makes him a coward. Albert calls it common sense. But when his girlfriend dumps him for the most insufferable guy in town, Albert decides to fight back—even though he can’t shoot, ride, or throw a punch. Fortunately, he teams up with a beautiful gunslinger who’s tough enough for the both of them. Unfortunately, she’s married to the biggest, meanest, most jealous badass on the frontier. Turns out Albert has just discovered a million and one ways to die in the West.

We weren’t always like this. We used to be average New York City high school sophomores. Until our homeroom went for flu shots. We were prepared for some side effects. Maybe a headache. Maybe a sore arm. We definitely didn’t expect to get telepathic powers. But suddenly we could hear what everyone was thinking. Our friends. Our parents. Our crushes. Now we all know that Tess is in love with her best friend, Teddy. That Mackenzie cheated on Cooper. That, um, Nurse Carmichael used to be a stripper.

Since we’ve kept our freakish skill a secret, we can sit next to the class brainiac and ace our tests. We can dump our boyfriends right before they dump us. We know what our friends really think of our jeans, our breath, our new bangs. We always know what’s coming. Some of us will thrive. Some of us will crack. None of us will ever be the same.
So stop obsessing about your ex. We’re always listening. 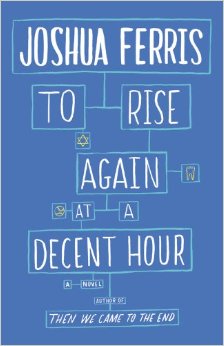 Paul O’Rourke is a man made of contradictions: he loves the world, but doesn’t know how to live in it. He’s a Luddite addicted to his iPhone, a dentist with a nicotine habit, a rabid Red Sox fan devastated by their victories, and an atheist not quite willing to let go of God.

Then someone begins to impersonate Paul online, and he watches in horror as a website, a Facebook page, and a Twitter account are created in his name. What begins as an outrageous violation of his privacy soon becomes something more soul-frightening: the possibility that the online “Paul” might be a better version of the real thing. As Paul’s quest to learn why his identity has been stolen deepens, he is forced to confront his troubled past and his uncertain future in a life disturbingly split between the real and the virtual.

It’s summer, and after ten years away, Allie Beckett has returned to her family’s cabin beside tranquil Butternut Lake, where as a teenager she spent so many carefree days. She’s promised her five-year-old son, Wyatt, they will be happy there. She’s promised herself this is the place to begin again after her husband’s death in Afghanistan. The cabin holds so many wonderful memories, but from the moment she crosses its threshold Allie is seized with doubts. Has she done the right thing uprooting her little boy from the only home he’s ever known?

Allie and her son are embraced by the townsfolk, and her reunions with old acquaintances—her friend Jax, now a young mother of three with one more on the way, and Caroline, the owner of the local coffee shop—are joyous ones. And then there are newcomers like Walker Ford, who mostly keeps to himself—until he takes a shine to Wyatt . . . and to Allie.

Everyone knows that moving forward is never easy, and as the long, lazy days of summer take hold, Allie must learn to unlock the hidden longings of her heart, and to accept that in order to face the future she must also confront—and understand—what has come before.

Flight attendant Summer Benson lives by two rules: Don’t stay with the same man for too long and never stay in one place. She’s about to break rule number one by considering accepting her boyfriend’s proposal—then disaster strikes and her world is shattered in an instant.

Summer heads to Black Dog Bay, where the locals welcome her. Even Hattie Huntington, the town’s oldest, richest, and meanest resident, likes her enough to give her a job. Then there’s Dutch Jansen, the rugged, stoic mayor, who’s the opposite of her type. She probably shouldn’t be kissing him. She definitely shouldn’t be falling in love.

After a lifetime of globe-trotting, Summer has finally found a home. But Hattie has old scores to settle and a hidden agenda for her newest employee. Summer finds herself faced with an impossible choice: Leave Black Dog Bay behind forever, or stay with the ones she loves and cost them everything…

That’s the week! Hope you had a great one and have some good reading /listening coming up!  Please add your link to It’s Monday!  What Are You Reading below where it says click here.

34 thoughts on “It’s Monday! What Are You Reading?”