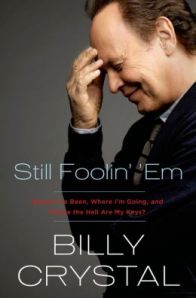 Billy Crystal…. comedian and movie star (When Harry Met Sally, City Slickers, Analyze This, Parental Guidance…), several time host of the Academy Awards, and more.  Now at the age of 65, Billy reflects on what it is like to age not gracefully (buying a plot instead of Christmas presents, and wearing half your meal on your shirt are just a couple of his topics) and his life and career.

I chose to listen to this audio while looking for something to start listening to on a two hour drive home a couple of weeks ago.  Having enjoyed City Slickers (both 1 and 2!) and Billy’s time as the Academy Award host I thought this would be an interesting and entertaining listen.

For the most part I was right.  Billy’s dabble into the senior part of his life is humorous as he loses his keys constantly and the inability to sleep through the night yet constantly doze off at plays.  His recollection of starting out in comedy and eventually show business was really the heart of this audio for me, I enjoy hearing how people get their start and his big moments and his “not so great ones’ really are heart warming as Billy learned how to capture an audiences attention and hearts.

Billy Crystal’s start in movies both good and bad is also a fun journey, from the stars he worked with, to his unending crush of Sophia Loren.  And Billy gets personal too as he talks about the birth and marriages of his daughters and all that is in between.

What I did not enjoy was that part of this audio version is read in front of a live audience.  More so in the beginning of the audio, but I found it to be more of a stand up show than a book for a while and did not enjoy the laughter on the audio or some of Billy’s cruder humor (clearly I had not experienced that side of his humor before and wasn’t expecting it… my bad 🙂 ).  For a while I thought I had made a mistake on this one – but audio listeners, hang in there – eventually he levels out into what I thought was a good and informative listen.  I do not know how those same chapters in the audio are handled in the book version.

All in all, I did enjoy this audio.  I learned a lot about Billy Crystal and his love of family and friends.  It was interesting to hear how insecure he often was throughout his career, second guessing his choice of jokes… and always appreciating when colleagues such as Muhammad Ali and Johnny Carson would call or tell him in person, “that was a great job!”

Fans of Billy Crystal, I think you will enjoy this.

17 thoughts on “Still Foolin Them by Billy Crystal”