Ok… so in case you have lived under a rock for the last 13 years (can you believe it has only been 13 years since this first book was released?)... anyway here’s the storyline:

So, before the book opens we learn that “he who shall not be named”, from this point forward for time-saving he will be known as HWSNBN, has wiped out Harry’s parents for reasons I can not now reveal and poor little Harry is orphaned and left on his aunt and uncle’s doorstep to be raised until he is 11.   Aunt Petunia and Uncle Vernon and their spoiled brat of a piggish son (no, I am not opinionated at all – why?) treat Harry like a virus.  He is forced to sleep in a closet space under the staircase and wears only Dudley’s very large hand me downs.

But all of this is about to change.

On the day that Harry turns 11 years old a large giant of a man arrives at the Dursley’s and announces to Harry’s surprise that he will be starting at the Hogwart’s School of Witchcraft and Wizardry and Harry learns in that same amazing moment… that he is a wizard.

From there life is a series of amazing events:  shopping for wands and owls, a magical train that is boarded from platform 9 3/4, meetings of the Weasley’s, meeting of Draco Malfoy (cue threatening evil music), Hermione – annoying but she grows on you, Neville who for some reason I really like, Dumbledore is awesome, a hat that sorts which house you will be a part of at Hogwarts, magical food appears on tables, professors that can turn into cats, Snape a name you won’t soon forget, spell classes that suck just a little bit, a troll in the lady’s room and a gross sentence or two on troll buggers, house points WON, house points lost, magical lessons and life lessons, whats up with Snape’s leg,  Malfoy prank backfires,  flying broomsticks and a game called Quidditch, a broom as a gift, stuttering Proffesor Quirrel and his mighty and also stinky turban, Quidditch practice practice practice, a little broom “almost” disaster, Hermione creates fire, a WIN for Gryffindor,  a secret, a three-headed dog, who is Flamel, Hagrid can not keep a secret, a cloak that makes you invisible, a mirror that shows your greatest desire, Haggrid may have a slight drinking problem, baby dragon, baby dra 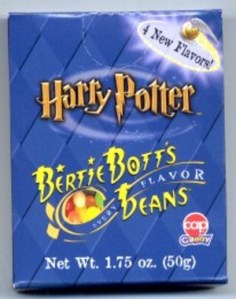 gon go away, DETENTION!, Snape steals into the Forbidden Forest (uhhh… helllo it’s called Forbidden for a reason!) dead unicorns, blood sucking floaty dude, centaurs (because really what is a good fantasy read without a centaur?), a magic stone (mmm hmmmm you knew that was coming, it’s in the title), sleepy flute music, HWSNBN makes a special guest appearance, life-size chess game, Ron gets a smack down, Harry plays Alice In Wonderland with a row of potions,Hermione uses her brain, mirror mirror who’s got the mirror,  old stinky turban returns, what’s in your pocket Harry, whoa – HWSNBN what are you doing there?,  well this is awkward, a little hospital tlc, info on the parental units, Bertie Bott’s Every Flavored beans and Dumbledore eats the ear wax flavored one, final house points awarded, the school year ends on an up note, High fives and “see ya laters” by the dynamic trio, Harry is hauled back to the Dursleys for summer break.

A year would not be complete if I did not dabble in yet another way to get my Potter dosage.  Last year I spent time with Jim Dale and enjoyed the audio version of these books.  If you have not tried them in audio – you are truly missing out.  Jim Dale was an incredible narrator and his voices were FANTASTIC!  I enjoyed these very much.  Now this time around I have listened to it in to audio again but with another narrator that I have heard was a “do not miss”, Stephen Fry.

Stephen Fry was also an amazing narrator and once again this story opened up to me like it was the first time.  There is something truly magical about these books.  Every time I read one or listen to one, I pick up on something new… something that links to a later book that makes me shake my head in awe of the incredible mind of J K Rowling.

If you haven’t had your Potter dose in 2011… I suggest you try one of the early books again, or try it on audio for the first time – even if you are not an audio person I think you will enjoy the Harry Potter books and your whole family will too 🙂

I borrowed this audio from my lovely library