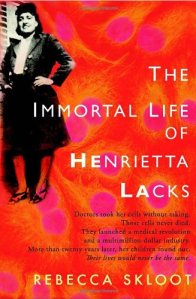 Thank you to Kim at Sophisticated Dorkiness

who told me at BEA in May of this year

that this was a must read.

You may have heard of her as HeLa, and in some instances as started by the Minneapolis Tribune, Helen Lake.  She was Henrietta Lacks, a poor southern African-American farmer.  She lived a simple life, married her cousin and had several beautiful children.  At the age of 31 she was diagnosed with cervical cancer and the doctors of the “colored ward” of John Hopkins Hospital in the 1950’s, took samples of her cells as they did with all patients, for testing.  Henrietta’s cells were different.  They continues to grow in culture, the first cells to ever do that.  They were marked as HeLa, as it was custom to take the first letter of the patients first name as well as the first letter of the last name to identify the cells.  Nobody at that time knew how big a deal this sample was.

Henrietta died from her cancer on October 4th, 1951, now 60 years later, her cells continue to live all over the country.  These cells became vital in developing the Polio vaccination, discovering some of the secrets of cancer, AIDS research, in vitro fertilization, cloning, gene mapping and as such has saved countless lives. If you could pile all HeLa cells ever grown onto a scale, they’d weigh more than 50 million metric tons—as much as a hundred Empire State Buildings.

Henrietta’s family did not know about the cells for nearly 20 years after Henrietta’s death.  No one had ever told them about the tissue sample taken or the amazing results from the tissue that had now been bought and sold all over the world.  All of us have somehow benefited from these cells either by a vaccination or a pill we have taken.  The cells have now made billions of dollars for the drugs industry and Henrietta’s family never seen a dime.

You may read the first paragraph about this book and think that Halloween is the perfect time to review this book.  Even as I wrote it I thought wow, this sounds like something right out of a horror movie…. living cells, never dying…. growing and growing all over the world. Yet, this is not fiction.  Henrietta did really live and is really the woman who changed science as we know it.  She never lived to know her contributions to the world, but as her family says, she would  be happy to know that her dying helped others to live.

Rebecca Skloot dialogues an amazing trip from her first hearing about HeLa and becoming fascinated about knowing more about the woman behind the cells.  As her fascination grows she takes her credit cards and student loans to fund her desire to learn more and in doing so meets the amazing family of Henrietta, including building a strong friendship with Henrietta’s daughter, Deborah.

I find as time goes on I become more and more engaged in reading memoirs and non fiction.  I have developed a strong thirst for knowledge.  I started listening to this on audio about a month ago and as the book progressed I started asking people I knew if they had ever heard of Henrietta Lacks.

I am so thankful I had the opportunity to experience this read and I would highly recommend it others.  The writing is engaging, I never found it to lull, and it left me with a strong knowledge of cells as well as Henrietta Lacks.  HBO is planning to make a movie about Henrietta Lacks and her cells.  I for one will be anxious to see it.

Cover Story:  Very appropriate.  This is the picture of Henrietta Lacks that was found in text books and magazine articles

I purchased this audio at audible.com