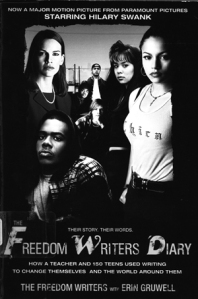 Twenty three year old Erin Gruwell was a new teacher in Long Beach, California.  Erin was filled with energy and ideas and was not deterred when she was given the students referred to as the “unteachables”.  Going optimistically head long into the class it did not take Erin long to see the invisible lines drawn between race, color, and social status.

When a picture is passed through the room making fun of a student, Erin brings up how hateful things like this start wars.  Mentioning the Holocaust she is shocked to find that most of the students in her room had never heard of this.  Using her own money, as the school would not provide books for such social outcasts, Erin teaches the students through reads like Anne Frank, and slowly builds the trust not only in her, but in each other.

I always try to read a book before I watch a movie although, such as in this case, it does not happen that way.  When I seen this movie years ago I did not even know it was a book.  The movie was phenomenal and even as I write this review and I think of this powerful story it brings tears to my eyes.

I had purchased the books years back after realizing it was a book and as many of my books do… it sat on the shelf until recently.  Reading this book, was  just as wonderful as the movie.

I can not stand hate.  It is a dirty four letter word.  I can not handle families torn apart and people judging each other for anything.  Having lost all of my immediate family members to tragedies, it breaks my heart to see families choose not to speak to one another over whatever differences they feel they have.

What I wouldn’t give to have one more conversation with my mom.  My dad.  My sister.

I am getting off course, but this book brings out a lot of emotion as I felt again within the pages, the hate, the labels, the teachers who looked at these students as a waste of their time and the schools money.  What Erin does costs her much, but the outcome…. is priceless.  Within this true story you will find the power and passion of one person, who erased the invisible hate lines by daring to cross them and showing love to students that were starving for it.

An amazing and powerful read that if you have not read – I highly recommend you do.  And this week, if you can make the time, I challenge you to rent this movie.  I would love to hear your thoughts on this.

Why was The Freedom’ Writers Diary Banned?

On March 11, 2008, an English teacher at Perry Meridian High School in Indianapolis, Indiana, Connie Heerman, was suspended for a year and a half without pay for using the Freedom Writers Diary in her classroom against the wishes of the school board.[ Administrators objected to racial slurs and sexual content in portions of the book. Heerman had received permission the previous year to attend a workshop based on the books and obtained permission slips from the parents involved. The school board contends that Heermen did not properly follow the rules to receive permission to use the book. Erin Gruwell commented on the controversy, saying, “The best way to get a teenager to read a book is to ban it. When someone who is a daunting authority figure says, ‘Give us your book’, I think these students [thought], ‘There must be something powerful in these words’.

*FYI.  The Diary of Anne Frank is also a banned book.

(1982) Challenged in Wise County, Virginia due to protests of several parents who complained the book contains sexually offensive passages. (1983) Four members of the Alabama State Textbook Committee called for the rejection of this title because it is a “real downer.” (1998) Removed for two months from the Baker Middle School in Corpus Christi, Texas after two parents charged that the book was pornographic. The book was returned after students waged a letter-writing campaign to keep it, and the review committee recommended the book’s retention.