This is one of those books I am almost ashamed to say that has sat on my shelf for years.  I bought it right away as the buzz began on what a wonderful book it was, and then…. there it sat.  And actually there it still sits because I have yet to read the book.  Recently I had been at my library and seen it in audio format and with my recent travels by car, decided this was one way I could finally be a part of what is known as The Kite Runner.

The following is my thoughts…

As the narration began (read by the author) I am brought into Afghanistan in the early 1970’s.  Amir is the son of a wealthy father, his mother having died during his birthing.  Amir always feels as thought he has to prove himself to his father and spends most of his childhood seeking for that forgiveness he feels he needs for his mother’s death.

And then we have Hassan, the son of Amir’s fathers servant.  The boys are inseparable, from morning to night they hang together, best friends, flying kites, running kites, and Amir reads to Hassan, who can not read but loves to hear Amir’s stories.

The Kite Runner, is their story. 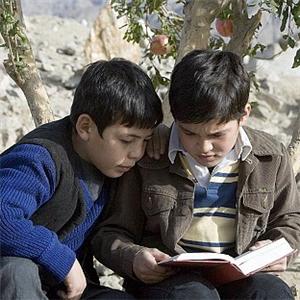 I am sure this book has been reviewed thousands of times through the years, and yet here I am – writing a review and hoping I can bring something new to the table.  Or if not new, perhaps a memory to those who have read this book… and remember, because seriously, how could one ever forget?  So many words rush to my fingertips as I type this review.  I have actually struggled writing this as I feel there is no way I can do this audio, this story,  justice, and at the same time I know I have to try.

The words are powerful.  I learned about kite running, something I had not known about but found fascinating.  The story at times takes my breath away.  Author Khaled Hosseini is the perfect narrator not only because this is his story, but his voice, being born in Afghanistan himself, breathed life into the characters that I feel touched me even more than if I would have read the book.

Well written, highly emotional, at times I am driving with tears running down my face.  And as those of you who have read or listened to this book know, there is a moment where an anger builds in me so strongly, that I am still not sure even after, if I have completely forgiven the act.  (See spoiler button below if you want to talk about this more).

Even if you have read the book, I am highly recommending that you go through it again on the audio.  Even if you don’t do audio – do this one.  Put it in your cars cd player or the cd player in your home while you go about house tasks.  You wont regret it, because when an audio is done well like this one, it is a whole new way to do books.

I am passionate about this book.  Easily one of the best books I have had the pleasure of experiencing in 2010.  Read it.  Listen to it.  But don’t let this one pass you by.

“For you, a thousand time’s over”.

I purchased the movie over a year ago knowing I would not watch it until after I had experienced the book.  A few days ago I sat down and watched a movie that a few in my book club said they could never watch because of the books content.  I knew I had to see the movie, knowing it would be hard.  It was.  And I wept openly again just as I had done before because I experienced it again – that heart breaking, heart wrenching moment that defines this book.  I watched it with my 20-year-old son Justin, who had not read the book, but not feels that he must.

My Book Journey has been updated here to include Kite Runner

Cover story:  It is very good, plain on the audio but I think I like it even more that the more modern cover of the two boys with kites.

I borrowed the Kite Runner audio from our local Library

I purchased the Kite Runner Movie

41 thoughts on “The Kite Runner by Khaled Hosseini”