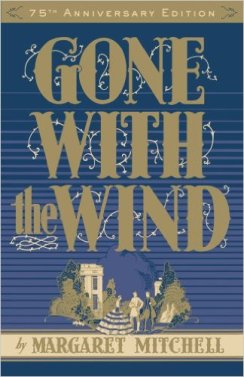 Classics can be fun to read and discuss with a reading group.  I personally always find the classics interesting to review because they are so well known and I am often surprised (and occasionally confused) about what makes a book a classic.  Why these books over others of their time?

Gone With The Wind is not a book that will leave you wondering.  There is much to discuss in this book including the author herself.

Here you will find suggestions for your own reading and discussion of Gone With The Wind.  Please feel free to use this as a way to start your own ideas to create an excellent fully rounded discussion.

Discussion Questions.  A simple google search for Gone With The Wind discussion questions is easy enough to do.  That is where I found ours.  Here are the questions we used from Lit Lovers.  I tweaked some of the questions to fit better for our group discussion:

1. Gerald O’Hara is described as “vital and earthy and coarse” (pg. 50). Why do you think society still considers him a gentleman? Is it simply because he married Ellen? Does his daughter Scarlett possess these same traits? What about her sisters, Suellen and Careen?

2. Discuss the general attitude towards education in Gone With the Wind. Gerald, Scarlett, and others refer to Ashley Wilkes’s studies as “foolishness.” Does this surprise you?

3. “To Mammy’s indignation, [Scarlett’s] preferred playmates were not her demure sisters or the well-brought-up Wilkes girls but the negro children on the plantation and the boys of the neighborhood…” (pg. 75). Why doesn’t Scarlett befriend other girls? As a young woman, whom does she show general affection and why?

4. “Sacrilegious though it maybe, Scarlett always saw through her closed eyes, the upturned face of Ellen and not the Blessed Virgin, as the ancient phrases were repeated” (pg. 87). Does Scarlett have these emotions because Ellen is her mother or because she admires her as a person? Why is Ellen so special to Scarlett? Is there anyone else Scarlett admires to the same degree?

5. While preparing for the party at Twelve Oaks, Scarlett asks Mammy “Why is it a girl has to be so silly to catch a husband?” (pg. 95). Considering the times, do you think this statement is accurate? Does Scarlett follow these rules herself? Are there any women in the novel who don’t act “silly” in the presence of men?

6. After overhearing her declaration of love to Ashley, Rhett Butler tells Scarlett “you, Miss, are no lady” (pg. 131). Is this the very reason he’s drawn to her? What is it about Scarlett that instantly attracts Rhett’s eye? Conversely, Aunt Pitty believes Rhett could be a gentleman if only he respected women. Do you agree? Are there any women he does respect?

7. There is very little discussion of Scarlett’s first husband, Charles Hamilton: “Within two weeks Scarlett had become a wife, and within two months more she was a widow” (pg. 139).  Were you at all surprised at Scarlett’s reaction to widowhood?

8. Discuss the many complicated issues of race in this novel. Mammy and Pork consider themselves a higher status than those who work in the field. Why do they believe this?

9. Most of her fellow Southerners will do anything for “The Cause,” and yet Scarlett admits to herself it means “nothing at all to her” (pg. 177). Is she being selfish or merely honest? Why do you think she feels this way? Does her opinion change throughout the novel? And if she doesn’t care about The Cause, why does she still hate “Yankees” so much?

10. Rhett warns Scarlett that he “always gets paid” (pg 242). Discuss the times when this is true. Why does he have this attitude? Is Rhett ever purely generous?

11. Considering he knows of her love, why does Ashley ask Scarlett to look after his wife, Melanie, while he’s at war? Is this a fair favor to ask? Does Scarlett agree only because she’s in love with him, or has she learned to love Melanie, as well?

12. “Oh, what fun! If he would just say he loved her, how she would torment him and get even…” (pg. 327). Why do Scarlett and Rhett feel the need to trick one another? Are there ever moments when they allow themselves to be vulnerable with each other? Why is honesty such a problem for them?

13. When the Yankees arrive in Atlanta, Rhett leaves Scarlett in the wagon to take care of Melanie and the others. Why does he leave them behind, as well as a life of comfort, to join the army he claims to dislike so much?

14. On her deathbed, Ellen calls out for her lost love, Philippe. Why does Margaret Mitchell include this seemingly insignificant back-story? Does this relationship parallel any others in the novel?

15. When she returns to Tara to find the Yankees have destroyed all their food and cotton, Scarlett utters one of the most well-known lines from Gone With the Wind: “as God as my witness, I’m never going to be hungry again” (pg. 408). Does this moment change Scarlett? From where does she find her strength?

16. Scarlett is often annoyed that her son, Wade Hampton, appears to prefer Aunt Melly. How would you describe her relationship with Wade? Much like his father Charles, why is he mentioned so infrequently? Do you judge Scarlett when she yells at him?

17. After Scarlett kills the Yankee soldier, Melanie immediately helps her dispose of the body, causing Scarlett to begrudgingly admire her “thin flashing blade of unbreakable steel” (pg. 420). How would you describe Melanie — as weak or strong? Does she know about Scarlett’s feelings for Ashley? If so, why does she remain so loyal to her?

18. Describe Atlanta once the war is over. Besides the physical damages, what are the biggest changes? Why do you think some of the newly free men remain loyal to their white families, while others try to start new lives? Do any of the former slaves now seem “successful”?

19. When Ashley returns to Tara, he confides in Scarlett that despite his wartime heroics, he considers himself a coward. What does he mean by this statement? Do you agree with him? Does Scarlett agree?

20. After finally finding a moment alone with each other, Scarlett and Ashley declare their love, but she admits “they were like two people talking to each other in different languages” (pg. 499). Were they ever really in love, or do they just admire each other greatly? And if he does love her, why doesn’t he stop her from offering herself to Rhett in exchange for the money to pay off the taxes?

21. When the war leaves them all poor, Scarlett cannot believe so many respectable families “still think, in spite of everything, that nothing really dreadful can happen to any of them because they are who they are…” (pg. 517). Do you agree that the former aristocrats remain the same, or as Ashley describes it, are in a “state of suspended animation” (pg. 677)? If so, why do you think this is? What makes Scarlett different? Does she still care what they think of her?

22. After Tara is safe, why does Scarlett remain so involved with the mill? Does she enjoy working even though it’s deemed unladylike? Where did she learn her business skills? Why is she successful when so many of the men are not? And why does she decide to do business with the Yankees, whom she continues to hate?

23. Why do so many of the white Southern men join the Klan? Is it a matter of race, or politics, or dislike of the Yankees? Do they want some sense of control after losing the war and having “Carpetbaggers” run their local government? Why is Scarlett one of the few to speak against the Klan? And why does Rhett try to rescue Ashley and Frank from the meeting when he learns of the Yankee soldiers’ trap?

24. Discuss the importance of religion in the novel. How important is God to Scarlett? During tough times, she often claims not to care what He thinks. Do you believe this is true? What about following the death of her second husband, Frank Kennedy? Does she feel guilt? When she tells Rhett she’s afraid of going to Hell and has many regrets, do you believe her (pg. 768)?

25. “No, my dear, I’m not in love with you, no more than you are with me, and if I were, you would be the last person I’d ever tell” (pg. 778). If what Rhett says is true, why does he propose to Scarlett, especially after repeatedly claiming he isn’t a marrying man? And why does he choose to propose so shortly after Frank’s death? Does he make a good husband?

26. Scarlett has one child with each of her husbands. Does she treat them differently? Does fatherhood change Rhett? If so, do you think his behavior would be different if he had a son instead of a daughter? How are Scarlett and Rhett affected by Bonnie’s death, both individually and as a couple?

27. The novel ends with Rhett rejecting Scarlett’s love, and her thinking “tomorrow is another day” (pg. 959). Is this another example of Scarlett refusing to quit, or does she really believe she’ll win him back? Do you think he’s truly fallen out of love, or will Rhett return to Scarlett “another day”?

28. In the beginning of the novel, Gerald tells Scarlett that land is “the only thing in the world that lasts…” (pg. 55). Is this true in Scarlett’s world? Ultimately, does she love Ashley, or Rhett, or her own children as much as she loves Tara?

Please feel free to share any additional thoughts or ideas in the comments.