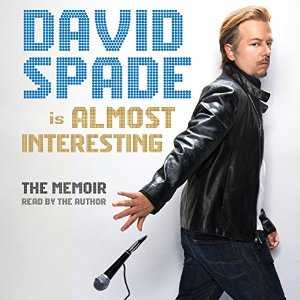 You probably know David Spade best for his time on Saturday Night Live (SNL), movies such as Joe Dirt, Tommy Boy, and Grown Ups, as well as TV shows like Just Shoot Me and Rules of Engagement.

In Almost Interesting David talks about the hard road to breaking into stand up comedy with no money or even a car to his name.  He shares his experiences of making his way on to SNL and working alongside legendary comedy giants such as Chris Farley, Chris Rock, and Adam Sandler.  There are moments of sadness, when David shares of his friendship with Chris Farley, and moments of freakishness, when Eddie Murphy threatens to pound David into the ground and does not talk to him for years, as well as many moments of laughter.

I listened to this audio book because it is up for an Audie Award.  While I am familiar with David Spades work, I am not what you would call a fan.  Still, I do love a good biography/memoir.  I went into this one not expecting much but am happy to admit I was pleasantly surprised.  Other than a few bumps in the narration and occasional long pauses that made me think my battery went out on my audio player, David Spade did a nice job.  One of my favorite parts in the audio is when he shares a joke and he starts to laugh a bit, and I think he cracked himself up.  That was fun and it made the experience feel all the more real, like David was just chatting about his life.

Overall I found this audio book to be engaging.  I really enjoyed the back stage pass to SNL and everything it takes to get on stage and continue to be on stage.  As a fan of Chris Farley’s work, I enjoyed listening to David’s friendship with Chris and how they kidded around together.  David does a great impression of Farley.  I especially found interesting how David got him start and how hard it was to break into the “funny” crowd.

I can see now why it was nominated for an Audie Award.  I have new insight and respect for David Spade having listened to this audio book