Good morning!  Thursday and I imagine many of you are making your plans (if you have not already started) for the big 4th of July weekend!

I mentioned yesterday I was taking Mater to the vet.  He was running a fever and acting like Eeyore walking slowly around with this head down.  No energy.  Turns out he had a lymph node infection in his shoulder and it had to be cut open to drain (yes… you may want to put down your breakfast for a few minutes).  They had him in the office for the day but he is home now, doing well and my job is to place a warm wash cloth over the would area several times a day to keep it open so it can drain.  Due to this, there was no strawberry picking as originally planned.

Dog and owner are doing well this morning.

I did want to talk about audio.  June as you know was audio month and I did not have my normal posts on how awesome audio is and why you all (yes you too Laurel!  😉 ) should give it a try.  However… this little gem on info from Audible.com crossed my path in email format yesterday and I can not help but share some highly anticipated audio coming in July. 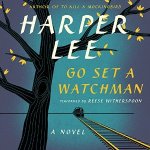 Go Set a Watchman by Harper Lee.  Harper Lee!!!!  Yes the author of To KIll A Mockingbird brings in this long anticipated jewel.  Narrated by…. wait for it… wait for it…. Reese Witherspoon!  I am seriously curious about this one. Originally written in the mid-1950s, Go Set a Watchman was the novel Harper Lee first submitted to her publishers before To Kill a Mockingbird. Assumed to have been lost, the manuscript was discovered in late 2014.   Release date 7/14/15

Armada by Ernest Cline (author of one of my all time favorite audio books Ready Player One).  I have gushed about this one before.  Another gamer type book, save the world, blah blah blah but also narrated by the great Wil Wheaton who is an EXCELLENT narrator.  Also release 7/14/15.  Can not wait!!!

Circling The Sun by Paula McLain, author of the Paris Wife.  This one is about the British born Kenyan Aviator Beryl Markham, the first woman to successfully cross the Atlantic solo from east to west.  There is  lot more to Beryl than meets the eye, so venture in to this historical treasure.  Released 7/28/15

Dexter Is Dead.  I never followed the whole “Dexter ” hype.  My son Brad said it was a crazy good series but I don’t think it is for me.  Anyhoo… Dexter is arrested on charges of murder. He has lost everything – including his wife, his kids, and the loyalty of his sister. Now completely alone, Dexter faces a murder charge (for a crime, ironically, he did not actually commit.  Written and narrated by Jeff Lindsay this is probably one to listen to if you are a fan of the series.  Release date 7/7/15

Bradstreet Gate catches my eye.  Georgia, Charlie, and Alice each arrive at Harvard with visions of what the future will hold. Then, just before graduation, a classmate is found murdered on campus, they find themselves facing a cruel and unanticipated new reality. Moreover, a professor who has loomed large in their lives is suspected of the crime. Though his guilt or innocence remains uncertain, the unsettling questions raised by the case force the three friends to take a deeper look at their tangled relationship.    Sounds good to me!  Release date is 7/7/15

There are more on the list that you of course can check out for yourself.  For new audible users, your first audio book is free so take a peek if you have not tried audible before.  I have used it for three years and love it.  The audio downloads right to my phone and I have it everywhere I go.  I also like that if I start listening to something I do not enjoy, I can return it to them and they give me my credit back to choose something else.

Today should be a fairly quiet day.   I am running to town this morning to get a few errands done and then working around the house today on a mailing I am working on and the monthly newsletter for the Friends Of The Brainerd Public Library.  I may have a coffee date this morning this will be nice as it is a lovely day to also sit on the deck.