Good morning.  It is Saturday.  Coffee Cup and I are on round two.  It looks as though it will be a nice day here in Central Minnesota, the sun is already shining…there really is no snow… so odd.

For today’s Saturday Snapshot I thought I would pop out a few more pictures from Australia.  We did spend three days in Sydney before we boarded the cruise ship.  They were not snoozy days – we were up early and exploring.  Here are some random shots of that time:

I can not recall if I posted about this lady before.  I know I put her on Facebook and if I did already chat about her here, sorry about that but perhaps she is worth repeating.  (Honestly I am too lazy to look back through my posts this morning).  In Sydney on the pier we found this lovely lady all in white paint standing as still as a statue.  However, if you were say a middle grade child… she would slowly move her hand and wave you over.  If the child’s parent/guardian were to take a picture of the smiling child in front of her… she would bend over the child and show her fanged teeth.  Yup.  It was super cool and the smiling child would not suspect until he seen the picture.  Awesome.

Two things about Australia…. Tim Tam – the cookie several of you told me I had to try so I diligently purchased a bag and shared them with the group.  Mmmm… they are good.  The coffee.  EEP.  When I would order coffee in the morning at the hotel (at about $4.00 a cup!) they make it one cup at a time.  I would have been happy for a good old gas station coffee but instead it was this super strong foamy brew.  Don’t get me wrong… I drank it.  It is coffee after all. 😉 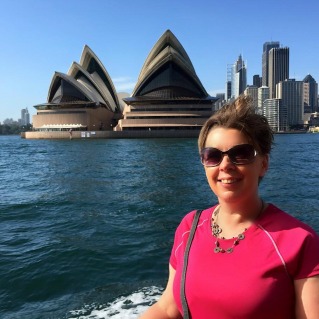 Hmmm…. flippy bad hair.  We were on a boat and it was beautiful out.  Behind me, of course is the famous Sydney Opera House.  From reading Bill Bryson’s book, In A Sunburned Country I learned this… Sir Eugene Goossens, the man who had started the idea of the Opera house never seen it completed.  In 1956 while passing through customs he was found to be carrying a large amount of pornographic materials.  Australia security pretty much said “not in our country”, and he was asked to leave… permanently.  That said, Goossen never did see the Opera House completed in all of its glory. 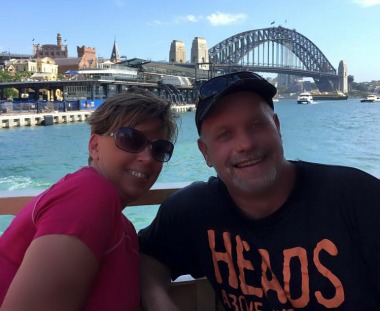 So.. the Sydney Harbor Bridge is the world’s largest bridge – but not the longest.  Once again, in Bill Bryson’s book I learned that it was meant to be the longest as well, however the bridge took longer to build than anticipated.  10 years later when the bridge was complete, it was discovered that just shortly before, the New River Gorge Bridge in Virginia had opened up and it was 10 inches longer.  “Doh!”

We purchased Ferry tickets one day in Australia and tooled around on the different Ferry’s going from here to there.  One of the Ferry’s went to an area where people came into the main town by Ferry.  It was a very ritzy area and this is one of the homes that we passed along the way.

Another view from the ferry.

I will leave it at that for today.. more to come… more sights to share. 🙂

This afternoon my friend Amy and I will leave for the cities, putt around, and wind up at the Great Gatsby Party this evening.  I am soooo excited!  This is part of my birthday weekend plans (my birthday is on Monday).

On another crazy note…. yesterday I was chatting about the Polar Plunge I participated in 4 years ago.  My mouth got the best of me on Facebook as I teased my cousin’s wife about her saying she would never do it again… by the end of that conversation she and I had both signed up to participate in the Plunge on February 28th in Anoka Minnesota.  😯

Ahhh well…. it is for a good cause.

If you would like to sponsor me, the proceeds go to Special Olympics

Have a super Saturday!!!