This morning,I was going to go a completely different direction with Saturday Snapshot.  As I walked my yard, I was taking pictures of trees…  I love trees and we have quite the variety, silver maples, apple, cherry, plum, oak, and even walnut.  But – that one will have to wait.  As I looked around the yard I love so much, I went somewhere else.

Last Friday June 13th marked the 13th anniversary of the tornado that destroyed most of our property, Al (hubby’s) business, and not only changed our lives forever – but those of our neighbors too.  This morning as I walked the yard I started taking pictures of the “now” and then came in the house and took pictures of the pictures I have in an album of the “then”.

On June 13th, 2001, I had come home from work around 5:30.  I remember all of this because I documented the day, and the days and weeks to follow, in a journal.  The sky that night, I need no journal to remind me of.  It was a thick sort of green and looked cartoonish.  In fact, I thought it was so unique that I went outside and took pictures of the sky with my camera at the time.  The pictures never did the sky justice, but one of the pictures I took from our back deck was this one of our neighbors farm:

So what went down?

Al had just left to go and do a bid for a guy on the south end of town.  I was on the couch reading after dinner and the boys ( at the time they were 10 and 12) were watching tv.  The tv came through with a tornado warning in the area.  This is common for June in this area and I barely even flinched.  Then, Al came running in the house telling us to all get in the basement.  He had been driving and seen the wall of the tornado south of us, turned around and raced home.

We all went to the basement, us and our two dogs.  We sat under the stairs and we could hear the wind pick up.  The house started to shake and dirt from between the floor boards above our head started to fall.  I remember I was sitting cross-legged and then thought better of it thinking if we did become trapped in the house how uncomfortable that would be to be stuck that way.

After a while – it just went quiet.

Al decided to go upstairs and look around.  I was envisioning that scene out of Twister where the dad opens the door to the cellar and is whisked away.  Upstairs I could hear him walking around saying “Oh no, no…”  I told the boys to stay put and I joined Al upstairs.  We had no electricity then – in fact we did not have electricity, or running water for the four days following.  Through the flashes of lightning we could see our home, plants turned over, our bedroom door was ripped off the hinges and was now in the living room, our windows had exploded and shards of glass had embedded itself in the walls across from the windows.  Outside we could see trees down everywhere and large chunks of our yard torn up.

Even as I type this I kind of tear up because it was a scary time for us.  Al had just finished putting up his 40 x 80 building for his business out behind our yard, and the electricity had just been put in the week before.  It was gone.

Here are some pictures from that night… to this morning.

It is the pictures of the friends who came to help afterwards that brings the tears back to my eyes but this time with a smile.  We worked for days afterwards, cutting up the trees, hauling away debris, repairing the house.  It took over a year to bring the house and yard back to some sort of normalcy.

Here is what happened during the tornado:

When all was said and done we resided the house with an aluminum steel siding.  We replaced the large bay window in the bedroom with a smaller one.  We saved the tree on the deck, he is half the tree he used to be but that is ok. 🙂  We have since remodeled the basement (2004) to now be a second level to our home – family room, a bedroom, storage and laundry.  Al rebuilt his business with the insurance money and is now thriving.  Our home has been remodeled, we built a new garage to go on the house, and our yard – while not as many trees as I would like…. has sort of a park look to it now and I like it. 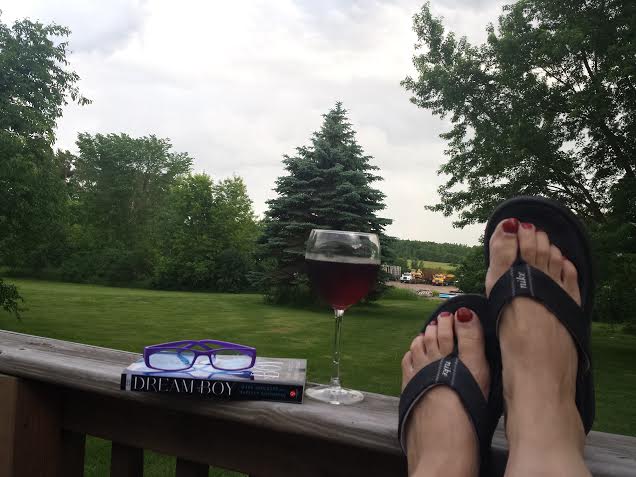 This final picture was taken last night.  I love my back yard.  And if you look way out you can see the trucks of Al’s business, 13 years later doing well, rebuilt after that night that rocked our world forever.

Check out other Saturday Snapshots here. 🙂