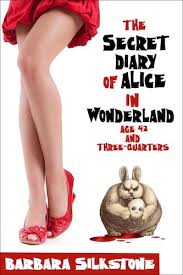 Poor Alice.  As a Miami real estate agent, her boss Leslie, could be part of a show called Worst Bosses. He is cruel, inappropriate, and will not release her from her contract of working for him.  She is pretty sure if given the chance, he would behead someone…. “Off with their head!”

In her dreams, Alice feels that if she could just escape Leslie’s grip she could start a new life… meet a man… move on… and not always feel like she fell down a rabbit hole.

When Alice does meet someone on-line, an Englishman she starts to chat with through emails and on the phone, Alice falls for his accented voice that almost seems to put her in a trance.  With visions of John Cleese in her head, she flies to England to meet Nigel Channing… even his name could melt a hardened heart.

While Nigel isn’t everything she pictured, she finds herself falling for him anyway.  Yet back in Miami things are becoming increasingly strange as her boss takes her court for false accusations involving selling a property and pocketing the down payment… all of which is untrue and Alice swears she can feel herself shrinking away.  Suddenly nothing in her life seems real, Nigel comes with a lot of baggage… A LOT.  And as old enemies try to befriend her, Alice really doesn’t know who she can trust…

Is there such a  thing as Alice in Wonderland syndrome?

I chose The Secret Diary Of Alice In Wonderland because it had a cute title and eye-catching cover. Perhaps a break down a rabbit hole could be a fun experience…

I however struggled with the strange connections, and found it hard to believe that someone as pretty as Alice would fall for someone the likes of Nigel Channing.  ( I think that love of strong independent women characters kicked in here and I did not like Alice’s inability to find someone right for her) Once author Barbara Silkstone started describing Nigel and all of his quirks and so on and so on, yet Alice stayed interested in him, I lost my belief in the storyline.

I hung in there until the end though as I was curious as to what would happen with Alice and the false accusations of her boss and the shady people who surrounded her…. all in all, the book for me felt way to out there.

Know that I seem to be in the minority on this one.  Reviews on Amazon rate this one high.  If you do like this, Barbara Silkstone has many books with a similar fun theme:

Wendy And The Lost Boys

Zo White and The Seven Morphs

Just to name a few…

Thank you to Author Barbara Silkstone and to Audio Jukebox for allowing me a chance to listen to and review this audio book.