Welcome to It’s Monday!  What Are You Reading!  This is a great way to plan out your reading week and see what others are currently reading as well… you never know where that next “must read” book will come from!

I love being a part of this and I hope you do too!  As part of this weekly meme I love to encourage you all to go and visit the others participating in this meme.  I offer a weekly contest for those who visit 10 or more of the Monday Meme participants and leave a comment telling me how many you visited.  **You do not have to have a blog to participate! You receive one entry for every 10 comments, just come back here and tell me how many in the comment area.

Since I was out of town last weekend I never got the previous winner posted so this is the two week ago winner and this past weeks winner using random.org (because that is how I roll!)

Congratulations!  Please choose a book or bookish item from the Reading Cafe!

What a busy and great week!  I am sitting here EXHAUSTED but in a good way.  I just returned Sunday afternoon from a craft weekend on the North shore.  We crafted, we watched movies – it was a good time!  I did manage to read a bit too:

A Wilderness Of Error by Errol Morris (True Crime)

The Wizard Of Oz by Frank Baum – a Bookies review and some fun dress up pics!

Telestrations – a fun new board game!

You’ve Been Warned by James Patterson

Not too bad a week and here is what is happening this week: 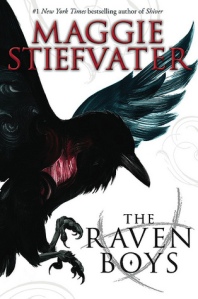 “There are only two reasons a non-seer would see a spirit on St. Mark’s Eve,” Neeve said. “Either you’re his true love . . . or you killed him.”

It is freezing in the churchyard, even before the dead arrive.
Every year, Blue Sargent stands next to her clairvoyant mother as the soon-to-be dead walk past. Blue herself never sees them-not until this year, when a boy emerges from the dark and speaks directly to her.
His name is Gansey, and Blue soon discovers that he is a rich student at Aglionby, the local private school. Blue has a policy of staying away from Aglionby boys. Known as Raven Boys, they can only mean trouble.
But Blue is drawn to Gansey, in a way she can’t entirely explain. He has it all-family money, good looks, devoted friends-but he’s looking for much more than that. He is on a quest that has encompassed three other Raven Boys.

Stalin’s Soviet Union strives to be a paradise for its workers, providing for all of their needs. One of its fundamental pillars is that its citizens live free from the fear of ordinary crime and criminals.

But in this society, millions do live in fear . . . of the State. Death is a whisper away. The mere suspicion of ideological disloyalty-owning a book from the decadent West, the wrong word at the wrong time-sends millions of innocents into the Gulags or to their executions. Defending the system from its citizens is the MGB, the State Security Force. And no MGB officer is more courageous, conscientious, or idealistic than Leo Demidov.

A war hero with a beautiful wife, Leo lives in relative luxury in Moscow, even providing a decent apartment for his parents. His only ambition has been to serve his country. For this greater good, he has arrested and interrogated.

Then the impossible happens. A different kind of criminal-a murderer-is on the loose, killing at will. At the same time, Leo finds himself demoted and denounced by his enemies, his world turned upside down, and every belief he’s ever held shattered. The only way to save his life and the lives of his family is to uncover this criminal. But in a society that is officially paradise, it’s a crime against the State to suggest that a murderer-much less a serial killer-is in their midst. Exiled from his home, with only his wife, Raisa, remaining at his side, Leo must confront the vast resources and reach of the MBG to find and stop a criminal that the State won’t admit even exists.

At first my eyes wouldn’t make sense of the letters. Finally, they unscrambled. Loving a Larger Woman, said the headline, by Bruce Guberman. Bruce Guberman had been my boyfriend for just over three years, until we’d decided to take a break three months ago. And the larger woman, I could only assume, was me.

Cannie Shapiro never wanted to be famous. The smart, sharp, plus-sized pop culture reporter was perfectly content writing about other people’s lives on the pages of the Philadelphia Examiner. But the day she opens up a national women’s magazine to find out that her ex-boyfriend has been chronicling their ex-sex life is the day her life changes forever.

Something has always felt slightly off in Meghan’s life, ever since her father disappeared before her eyes when she was six. She has never quite fit in at school…or at home.

When a dark stranger begins watching her from afar, and her prankster best friend becomes strangely protective of her, Meghan senses that everything she’s known is about to change.

But she could never have guessed the truth—that she is the daughter of a mythical faery king and is a pawn in a deadly war. Now Meghan will learn just how far she’ll go to save someone she cares about, to stop a mysterious evil no faery creature dare face…and to find love with a young prince who might rather see her dead than let her touch his icy heart.

Thats the week.  How about you?  Add you Its Monday What Are You Reading link to where it says click here below.

and those of you who read mainly children’s through YA reads – please ALSO link your post here:

32 thoughts on “It’s Monday! What Are You Reading?”