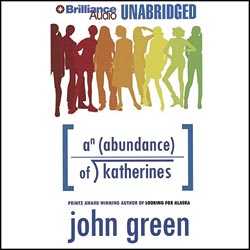 From grade school on, Colin Singleton has had a thing for girl’s names Katherine.  And it would seem that Katherine’s have a thing for Colin as well – except…

he always winds up getting dumped.

After the 19th Katherine (henceforth known as “K19”) drops Colin, he and his best friend Hassan (picture a quite overweight high school graduate who LOVES Judge Judy) decide to take a little road trip to anywhere, just a chance to get away one summer.  They find themselves in Tennessee in a town called Gunshot where they meet a girl names Lindsey and wind up getting jobs from her mother.

While Colin works on a mathematical theory on who will be the dumpy in any relationship, he encounters another Colin (henceforth known as the “other Colin”), a wild boar, and many interesting characters that keep this book moving forward to a place where Colin finally finds his way through the enigma that is a Katherine.

Why did I read this book?  I listened to this on audio as I have been doing all summer with John Green’s books.  I have found him to be such a an interesting author and I am loving his stories…. An Abundance Of Katherine’s was next on my list :D.

An Abundance Of Katherine’s was a typical smartly worded read by John Green.  I find that this characters are usually a smarter than the average bear breed, and usually borderline geeky as well.  (These are the characters I love).  Colin in this book is a child prodigy, he is word smart and makes anagrams constantly out of names and places.   Author John Green I have notices has a way of taking his characters and giving them brains and fun facts that are sprinkled casually throughout the books he writes so by the last page you actually come out having learned something.  I also love that his characters are usually bookish and book references really… make my day.  😛

I have to say – I thought the idea of this book was a bit silly…. a boy who has dated only girls named Katherine?  BUT – at the same time John Greens typical witty humor made me overlook the improbability of this book and just read it and enjoy.  (Don’t judge me… you know you have overlooked realism a book or two just for the sheer fun of reading!)

In the end – while not a favorite John Green book, a worthy one that I did enjoy.  John Green has a way of taking several characters and making them all 3D, so much you feel that you could pick them out of a line up and chat with them on the street.

My recommendation – if you have not read John Green, you are missing out.  I would recommend, Will Grayson, Will Grayson (do this one on audio!) and The Fault In Our Stars ( a definite favorite read of this year!)

16 thoughts on “An Abundance Of Katherine’s by John Green”