Jane Margaux is a girl who lives in a fairy tale world.  Her mother is the head of a powerful New York Theater and their home is filled with riches.

Yet Jane is a very lonely little girl… her mother, the powerful and feared Vivian, makes time for her daughter once a week where on Sundays they go and admire the jewelery at Tiffany’s.

Jane has one friend who she can confide in and that would be Michael.  Michael listens to everything Jane says.  He hears and encourages her dreams and he shares with her the sorrows.  Michael is everything you would want in a best friend.

And then on her 9th birthday, which is an epic disaster of its own, Michael tells Jane that he has to leave her.  He tells her while it hurts this day, when she wakes in the morning she will have forgotten him…. that’s the way it works…. that’s the way it has always worked.

But for Jane it doesn’t work that way… she misses her friend every day of her childhood and even into adult life.  Now producing her own play, a play about a young girl and her imaginary friend….. she is still under her mother’s thumb.  And then one day out of the corner of her eye she sees him….

My book club chose this book for our April read.  As you know from a recent post, I take no issue with Patterson and have found many of his books to be well written.  I have read him before when he wrote in this style and was impressed, his book Suzanne’s Diary For Nicholas was read in one sitting and left me in tears of joy and sorrow – all rolled into one.

This was the first time I listened to a book club book rather than read it.  I was going to purchase the book but Kerri in our book club has picked up the audio at the library and was done listening to it and offered it to me.  I thought, why not?  What was funny was with the female narrator (who was very good!) I forgot who the author of the book was.  And it read on and the chapters flew by I remember thinking one day while I was driving through town, “wow this author has short chapters just like Patterson does.”  Then had to laugh – as I remembered, “Oh yeah… .this is Patterson.”

For most of the audio/book I adored the story.  I liked Jane, she starts out a little weak, but she is meant too – after all growing up in a household where you are constantly badgered by your mother on how to look, what to wear, what to eat…. yeah, that is going to leave a mark.  BUT – Jane is not all weak and you can see a flicker of her own personality start to slowly flicker and then burn brighter within her as the book goes on.

I even really liked Michael – he is just a sweet guy and when the impossible happens, they find each other again, there is a sweet tone to the storyline – and I was still fine with the book…

Then somewhere along the line it hit me… when Jane was 9…. Michael wasn’t…. he was 32.  In fact he is 32 throughout the whole book being whatever he is (my book club tried to figure it out – an angel? A spirit? ) and never ages.  Now when they get back together Jane is very close to his age and its all cool – but I could not let go of the 32-year-old imaginary friend when Jane was a little girl.  I guess I just believed that when she was 9 so was he and that he just aged along with the rest of the world until they met again with adults.

Overall – the book is a good read.  I did like the characters and I thought while the ending was all too neat and tied with a bow, it was still a respectable ending for a Patterson book that gave off a Nicholas Sparks vibe.

My book club met on Tuesday of this week to have dinner together and discuss this book.  I love it when we

theme the foods to the book and Sundays at Tiffany’s is a dangerous book to do that with as the book is fulled with delights from Jane (and Michael’s) sweet tooth.   Thank you to Amy M’s hubby Paul for the delicious chocolate cake (this man can bake!) topped with truffles!  AND Laura brought an oreo ice cream cake as Jane’s favorite food is Oreos.  We also had a delicious chicken dish served on noodles or rice and Thai Chicken, a salad, and another chicken hot dish.  Amy served wine and lemonade, I brought cheese to go with the wine.

I wanted to start out our discussion with everyone sharing if they had an imaginary friend when they were little… turns out, out of our group – I was the only one.  I was really surprised and through we would have a big discussion over this but it was just me.  her name was Julie…. I guess I was probably around that 8 or 9 age.  I remember walking with her at my grandmothers home in town, and I remember her in our home when I would talk to her about everything.  The group thought that maybe because I was an only child until I was 7 that may be why I had a “Julie” where they were all surrounded by siblings or other kids.  I found that very interesting as I had never thought about who has imaginary friends and who does not and why….

Over all the Bookies found the book to be a slightly higher than average read.  Only one other girl in our group found the Michael (32) and Jane (9) friendship to be creepy.  They looked at is as Jane’s replacement for the absence of her father in her life.  I can see that…. (ahhh the beauty of a book club discussion – you can things differently through others opinions!)  😀 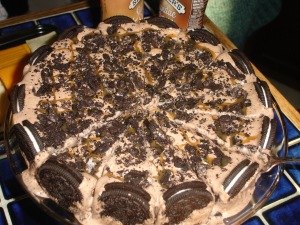 the Bookies, no matter what the book is like – we just enjoy getting together and always find a way to discuss the book and have fun.  We finished up our review with what our “can not pass up” foods are  and they were all over the board:  Chocolate cake, popcorn with cinnamon sugar and real butter on it, dill pickle sun flower seeds, toast with cinnamon and sugar and butter on it, cheese, anything chocolate….)