It’s Monday! What Are You Reading, is where we gather to share what we have read this past week and what we plan to read this week.  It is a great way to network with other bloggers, see some wonderful blogs, and put new titles on your reading list.

I love being a part of this and I hope you do too!  As part of this weekly meme I love to encourage you all to go and visit the others participating in this meme.  I offer a weekly contest for those who visit 10 or more of the Monday Meme participants and leave a comment telling me how many you visited.  You receive one entry for every 10 comments, just come back here and tell me how many in the comment area.

Congratulations!  Please choose an item out of the PRIZE BOX and email me your choice with your mailing address as well!   journeythroughbooks@gmail.com

Another week has flown by.  Did this week seem fast to anyone else?  I can not even believe it is Sunday afternoon here and I am once again typing up the Monday What Are You reading post.  Last weeks post was so incredibly annoying as my laptop chose to go in a coma while I was prepping the post.  I then moved on to my hubby’s lap top which is set up for Internet Explorer and I struggled for hours with the post, the pictures, and the links – to the point that for the first time since I took over this meme (over a year ago now) that I was unable to post until Monday morning central standard time.

Since then, my laptop came back to life Tuesday afternoon (so weird…) and now again today – has gone on to other worlds.   GAH!  I am back on hubby’s laptop hoping that I can get this up at a decent hour with little to no (*fingers crossed*) trouble.

Yes – I am looking into purchasing a new laptop but had false hope when my previous one came back to life with no signs of future trouble….

Author Chat With Cheryl Lu-Lein Tan – author of A Tiger In The Kitchen (oh how I loved the book, and Cheryl was awesome to chat with!)

The Year Of Pleasures by Elizabeth Berg (yes the journey through Berg continues and sometimes.. its not an easy road…)

1st To Die by James Patterson (yes – pretty old school of me but I wanted to try this series and yipes!  I liked it!  :D)

Oh and another fun thing, Cheryl at CMash Loves To Read featured me in her Sunday Shining Star post.  It was fun to chat with her.  😀

So that bring me to this week…. 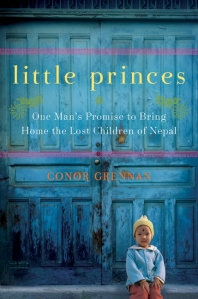 Have you seen this book around?  I have wanted to read it so badly and seen it on so many other blogs.  When it was offered to me for review it was with a huge YES that I responded.  😀

In search of adventure, 29-year-old Conor Grennan traded his day job for a year-long trip around the globe, a journey that began with a three-month stint volunteering at the Little Princes Children’s Home, an orphanage in war-torn Nepal.
Conor was initially reluctant to volunteer, unsure whether he had the proper skill, or enough passion, to get involved in a developing country in the middle of a civil war. But he was soon overcome by the herd of rambunctious, resilient children who would challenge and reward him in a way that he had never imagined. When Conor learned the unthinkable truth about their situation, he was stunned: The children were not orphans at all. Child traffickers were promising families in remote villages to protect their children from the civil war—for a huge fee—by taking them to safety. They would then abandon the children far from home, in the chaos of Nepal’s capital, Kathmandu.

For Conor, what began as a footloose adventure becomes a commitment to reunite the children he had grown to love with their families, but this would be no small task. He would risk his life on a journey through the legendary mountains of Nepal, facing the dangers of a bloody civil war and a debilitating injury. Waiting for Conor back in Kathmandu, and hopeful he would make it out before being trapped in by snow, was the woman who would eventually become his wife and share his life’s work. 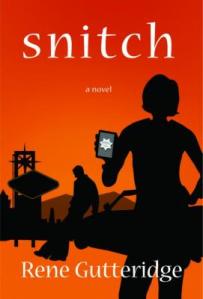 Last weekend ago I read and LOVED LISTEN by this same author.  Having checked out several of her books from the library (which are bcoming dangerously close to being overdue…) I want to read at least one more of hers before they go back.

Convinced he has a greater chance to die–of boredom–at his desk job than he ever faced in narcotics, Las Vegas police sergeant Ron Yeager agrees to slip off the retirement track long enough to head up an undercover task force designed to combat the recent surge in auto thefts.

Then he meets his inexperienced team of officers, most of whom seem completely incapable of infiltrating the seamy underbelly of Sin City. In particular, Mackenzie “Mack” Hazard’s determination to wear her faith like a badge threatens to send Yeager’s blood pressure skyrocketing. And then there’s maverick Jesse Lunden, who thinks he’s learned all he needs to know in his three years of undercover work.

As Yeager gambles his reputation on transforming this group of egos and eccentrics into a force to be reckoned with, he stumbles onto a much bigger scheme than anyone expected. This could be the showstopper of their careers–if his back doesn’t give out first.

I do not even recall how this one got on my radar.  It is in the pile of library books i checked out but I can not recall now if I seen this somewhere, heard about it – or just thought it looked interesting….  (I feel much like my computer that maybe my own brain is being fried as well and I too am not loading up properly :razz:)

A new life. An new school. A new bully. That’s what Darrell Mercer faces when he and his mother move from Philadelphia to California. After spending months living in fear, Darrell is faced with a big decision. He can either keep running from this bully–or find some way to fight back.

I have been fascinated with these books since I first heard of them but have never taken the time to try them.   I picked this one up on sale at audible.com and started listening to it a but this morning.

What would happen if you discovered that your family was one of the most powerful in human history? What if you were told that the source of the family’s power was hidden around the world, in the form of 39 Clues? What if you were given a choice – take a million dollars and walk away…or get the first Clue? If you’re Amy and Dan Cahill, you take the Clue – and begin a very dangerous race.

I also need to finish the Michael Sullivan series this week and I will be in need of a new audio book too, just need to see what comes in from the library.  😀

Last week with all the computer “opportunities” it became near impossible to visit all the posts but I do hope this week will be much different and I will get around to visiting all of you – it really is a favorite part of my week and I pick up such good reads from you who love books just as much as I do.

Be sure to add your link to your Monday What Are You reading post below where it says click here.  See you out on the blogs!  😀