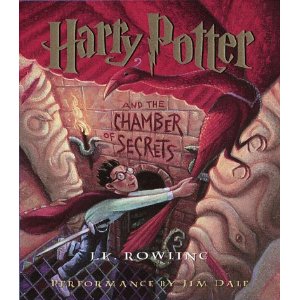 Coffee Connections:  The Elephant House of Edinburgh,  is where J K Rowling wrote most of the first Harry Potter book.

Cover Love:  Yes, the cover of this second book is perfect to attract kids of all ages!

Ever since Harry Potter had come home for the summer, the Dursleys were so mean and hideous that all Harry wanted was to get back to the Hogwarts School for Witchcraft and Wizardry. But just as he’s packing his bags, Harry receives a warning from a strange, impish creature named Dobby who says that if Harry Potter returns to Hogwarts, disaster will strike.

And strike it does. For in Harry’s second year at Hogwarts, fresh torments and horrors arise, including an outrageously stuck-up new professor and a spirit who haunts the girls’ bathroom. But then
the real trouble begins–someone is turning Hogwarts students to stone. Could it be Draco Malfoy, a more poisonous rival than ever? Could it possibly be Hagrid, whose mysterious past is finally told? Or could it be the one everyone at Hogwarts most suspects…Harry Potter himself!

I kept hearing from everyone how amazing the Harry Potter books were on audio so I went out and found the second book on audio at my library, and it was everything I was told it would be – and more.

What amazes me continuously about J K Rowling and the Potter books is, I never get tired of them.  I can’t put my finger on it but I loved them all the first time I read them…. loved them when I read them all again a couple of years ago…. and now going through them again – if anything I love them more.

Why?  I ask myself the same question.  I keep thinking as I get older, and read more books, the magic I found in the wizardly world will fade…. but it doesn’t.  If anything – just the opposite happens and I find each trip to Hogwarts to be more magical.

The audio was fantastic.  I much own them some day.  Reader Jim Dale was astounding and his voices for the different characters was spot on.  I could have sworn Hagrid was the same Hagrid I hear in the movies.  Moaning Myrtle – yup…. he could do her voice well too.

And what hit home for me this time around was the Weazley Twins, Fred and George.  As they are up to their typical trickery…. I had to smile as I pictured J K developing these two delightful characters.  Here she was, no teens of her own – but she had these two spot on… For that matter, she has them all spot on.  Ron is a perfect younger brother, trying to make his own name in the world, Hermoine is fantastic and well – do we even need to discuss the incredible and amazing Harry? 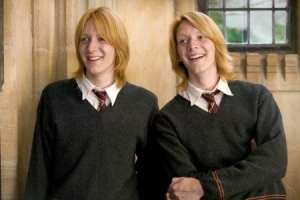 A thoroughly enjoyable audio that I would recommend for the whole family.

I received the copy I listened to from my local Library