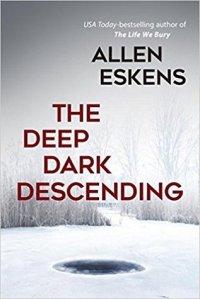 Yes, my Esken’s gush continues from yesterdays posting of The Heavens May Fall.  A brilliant writer who I have found to capture a bounty of talent within a binding.  Allen Esken’s never ceases to surprise me.

Detective Max Rupert has never come to terms with his wife’s death, the result of a hit and run.  When evidence is found that proves Max’s suspicions, that her death was no accident but cold-blooded murder,  Max falls into a world of grief and despair and an unquenchable desire to seek revenge on those involved.

As Max follows the clues he becomes more consumed to the point of not carrying what his decisions going forward could mean for himself.  When his obsessive need for revenge brings him to a cold and frozen lake on the far outstretches of Minnesota somewhere where his actions may never be brought to light, Max steps over a line that he himself had convicted many people for less.

Whoa and whoa.  Seriously whoa.  This book, and its nature really starts in Heavens May Fall as you learn more about Max’s growing obsession with his dead wife.  As heaven’s May Fall comes to a close, facts (bread crumbs) are dropped into the reader’s mind that all that surrounds Jenni Rupert’s death is not as it was to seem.  Deep Dark Descending really is all about what Max does with this new-found knowledge that his friend Boady placed in his care.

For myself, I am fascinated with what Allen Esken’s brings into a book.  Knowing his background as an attorney makes it all the more fascinating for me as I imagine he is pulling from his own experiences and then adding his own spin to what happens when someone is pushed right to their breaking point.

I devoured Deep Dark Descending on audio, listening every chance I had to know what would happen as Max uncovers hard truths and makes even harder decisions of what to do with these truths now that they are fully revealed.